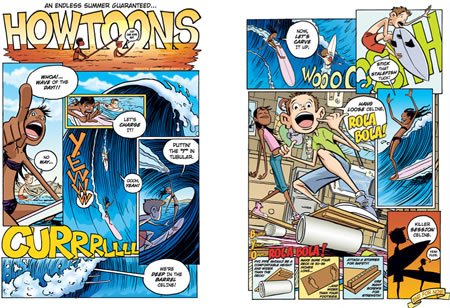 I’ve long been fascinated with the idea of comics and cartoons as a medium for instruction or teaching. Here’s an interesting take on that idea.

Howtoons is a series of how-to projects for kids (or adults going through a second childhood) presented as comic strips or cartoon-like panels. In them we’re introduced to Tucker and Celine, fantasy characters of brother and sister who are tired of watching TV and bored with video games (I did say fantasy characters), and so take to inventing “Tools of Mass Construction”; making playthings and learning projects out of clothespins, soda bottles, duct tape, cardboard and other kid-ready materials.

Their how-to projects are collected as a book, also just called Howtoons, and are presented in a more limited collection online.

The projects are sometimes presented as a comic strip and sometimes as a single panel, often accompanied by downloadable PDF’s that can be printed. Sometimes the printable PDF’s are the project, one of which is that great old standard of a zoetrope, one of the oldest and most basic methods of creating animation.

Other online projects include a soda bottle submarine, a cartoon explanation of the Beaufort Scale (for measuring the force of wind at sea), and a “Rola-Bola” (image above).

The site is rounded out with Library that includes articles on comic book artists like Kirby, Toth, Eisner and Herriman, and links to other related do-it-yourself or how-to sites (like the terrific Exploratorium), as wall as a nicely done set of links to Wikipedia articles about historical and contemporary figures who are Legends of art and invention.

There is also a blog, where the contributors discuss their projects and other how-to and related resources on the web.

One thing the site is lacking is a “Credits” or “About Us” page. The book is credited to Saul Griffith, Joost Bonsen and Nick Dragotta, with the illustration credits going to Dragotta, who has done some work for Marvel Comics. They apparently get a little help from Ryan McKinley and Phil Torrone.