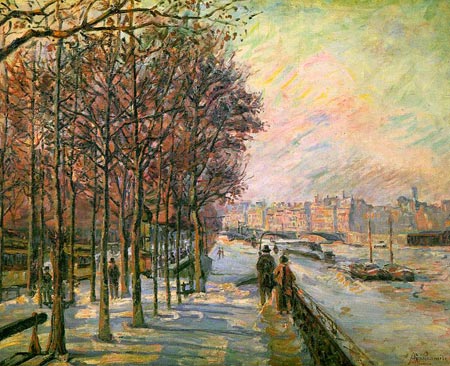 It’s amazing how strongly the lens of art history suffers from tunnel vision. In any given area we hear and see a great deal about the “stars” of that genre, while countless other artists fade into obscurity at the edges of our vision.

Just who is “famous”, of course, varies from place to place and from year to year, and depends strongly on who is writing the history.

Armand Guillaumin is a seldom mentioned member of the group of painters who became known as the French Impressionists. He exhibited in the Salon des Refueés, the alternate exhibitions formed by the Impressionists when their work was refused by the official Paris Salon, and most of the Impressionist group exhibitions, including the first one.

Guillaumin studied at the Académie Suisse, where he met Camille Pissarro and Paul Cézanne, with whom he would remain friends for the remainder of his life, and with whom he would exchange influence, though he never received their level of acclaim. Guillaumin was present and influential in the Impressionist circle throughout it’s extent, and later, became a friend of van Gogh and sold some of his works through Van Gogh’s brother, Theo.

While his work is not as striking or facile as some of the more noted Impressionists, Guillaumin was known for his intense colors, and his landscapes and cityscapes of Paris and the eastern Mediterranean coast of France. In his later work he pushed his color into ranges that would presage Fauvism.

Guillaumin, who lived to be 86, died in 1927, and was the last survivor of the original Impressionist circle.