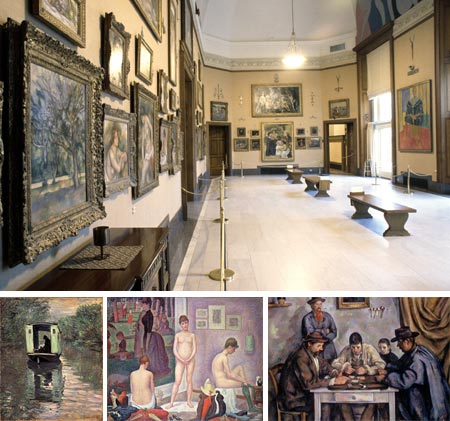 Most small museums, and many major ones, started as the collection of a single individual. Most are strong in a particular area based on that collector’s preference for a genre, time or group of artists.

Some collections are more idiosyncratic than others, and The Barnes Fountation, a school and museum in Upper Merion, just outside of Philadelphia, falls firmly into that category.

Dr. Albert C. Barnes was a physician who made a fortune with the development of a patented antiseptic drug. In the early 20th century he began to dedicate himself to the collection of art, assisted initially by painter William Glackens. He traveled to Europe, visited Gertrude and Leo Stein and met artists like Picasso and Matisse. He had a taste for modern (at the time) painting and was in the right place at the right time to start his collection, picking up his first Picasso, for example, for under $100.

He acquired a remarkable collection of more than 1.000 works, with notable pieces by Monet, Modigliani, Degas, Seurat, Van Gogh and other Impressionists and post Impressionists. Barnes liked Cazanne, and collected 69 of his works, and was particularly enamored of Renoir, purchasing 180 of his paintings; leading to my short phrase description of the Barnes collection as “every bad Renoir ever painted”.

I didn’t realize how many bad Renoirs there were until I visited the Barnes. (Just my opinion, of course, your mileage may vary.) I do like Renior when he’s painting at his best, and the Barnes has a couple of those, though the best ones in the area are in the Philadelphia Museum of Art.

Barnes expanded his reach into the past to works by masters like Daumier, Delacriox, Rubens, Lorrain, Tintoretto, Bosch, and even Titian, and there are some real gems sprinkled among the suffocating overload of Renoirs. My favorites are Monet’s “House Boat” (actually a boat rigged for painting excursions on the Seine, image above, bottom left), some beautiful small pieces by Corot and, in particular, a couple of great little still life paintings by Chardin that, for me, are worth the price of admission.

Barnes built a school and museum near his home in Upper Merion, on the grounds of an existing arboretum, to house his collection and make it available to the students of the school, which has classes in art, art appreciation and horticulture.

Dr. Barnes had some odd ideas about art, and arranged his collection in ways that defied all conventions for the display of collections of artwork. The paintings are arranged in a variation of Paris Salon style, i.e. wall to wall, floor to ceiling; but rather than being grouped according to time period and genre, as most collections logically are, the groupings in the Barnes are by odd criteria like the size and shape of the works and their frames, or predominant colors in the compositions, and are often displayed with objects like keys and door latches that Barnes felt contained “artistic” curves or lines, that were somehow related. Some of the groupings are arranged to form large ovals or other shapes, with the pieces chosen to accommodate their fit into the arrangement.

While amusing at first, and sometimes presenting interesting and unexpected juxtapositions, Barnes’ arrangements can stymie anyone who is actually trying to find particular works or paintings that are related.

There has been talk at times of breaking up the arrangements into something more conventional, but preservation of the arrangements is stipulated in Barnes’ will; as are a number of other issues that have been controversial over the years and are becoming news again in a city still not recovered from the disgraceful Thomas Jeffereson University Thomas Eakins debacle.

Barnes established the foundation as a school, not as a museum, and dictated that his collection remain in the building he built for it in Merion, not be loaned out or toured and that public and scholarly access be severely limited, intending that the collection existed for the benefit of the students, not the general public or the “art establishment”, which he despised. Renowned art historians and many other interested parties were turned away, sometimes with rejection letters signed by Barnes’ dog.

The collection is open to the public, but access is still limited; you need to make a reservation in advance and the galleries are only open on certain days of the week. It’s definitely worth a visit, however, if you are in the Philadelphia area.

Limited access became, and is now, the center of controversy, involving lawsuits, countersuits and even legislation. In the early 1990’s, the Barnes Foundation’s board, claiming that limited funds prohibited needed repair to the building, got a judgment breaking some of the terms of Barnes will and arranged a world tour of Impressionist works. Despite the the tour, the foundation neared bankruptcy amid allegations of missing funds.

In the meanwhile residents of the upper-crusty suburban neighborhood in which the foundation is located were up in arms about plans to increase the severely restricted admissions policy, fighting it tooth and nail with a “not in my back yard” fervor. The foundation’s board recently got a judicial ruling permitting them to move ahead with plans to move the collection to a new home on the Ben Franklin Parkway in Philadelphia, near the Philadelphia Museum of Art and the Rodin Museum, and make it publicly accessible among the city’s other great museums.

Many of those same “not in my back yard” neighbors are now up in arms again and have mounted a campaign called “Friends of the Barnes Foundation” to “save the Barnes” and keep it in it’s current home (with slight increases in access). One of the local legislators, hoping to butter his bread among these active and influential constituents, has even proposed legislation to tax away any funds raised to move the collection form its current home. On the other side, it was discovered that there was a $100 million state appropriation for construction of a new building that existed two years prior to the court ruling that would have permitted it.

As I’ve said before, you can take the art out of politics, but you can’t take the politics out of art.

4 Replies to “The Barnes Foundation”