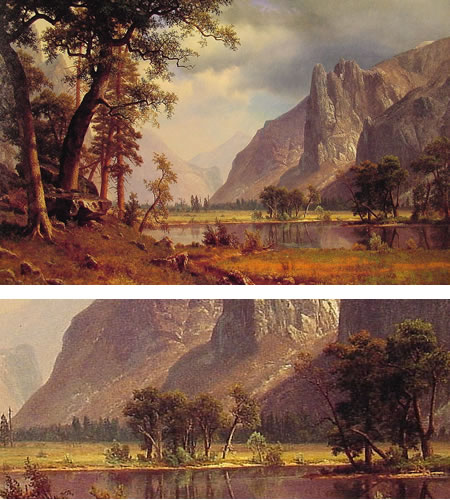 By the time Albert Bierstadt began painting his dramatic landscapes in the middle of the 19th Century, the mountains of New York’s Hudson valley, once the epitome of the American wilderness, had been widely portrayed by two generations of painters, from Thomas Cole and Asher Durand to Frederick Church, John Frederick Kensett and the Luminists.

Church himself would travel to South America in search of even more dramatic and unspoiled wilderness, but Bierstadt found his calling in the still wild American west.

Bierstadt was brought to America at the age of two when his parents emigrated here from Germany. Little is known about his early artistic training, it may have consisted only of resources available in and around the tiny town of New Bedford, Massachusetts where his parents had settled. In his early 20’s, Bierstadt traveled back to Germany to study in Dusseldorf, returning a few years later to paint scenes of New England and the mountains of New York.

In search of ever more wild and dramatic vistas, Bierstadt took several journeys west, one of them on the wagon train sent to chart a path for the Transcontinental Railroad. He would return to a studio in New York, a studio with exceptionally high ceilings that would accommodate his enormous canvasses, and he would translate his sketches and small paintings into grandly dramatic scenes that proved to be tremendously popular.

Bierstadt was tremendously impressed by the grandeur of the Rockies, which he felt bested even the Alps for drama, and was particularly struck by the Yosemitie Valley, which became the subject of numerous paintings. The image above (with detail at bottom) is simply titled Yosemitie Valley, and is not one of his larger paintings (60″ by 38″, 152cm x 96cm, larger version here).

I’ll suggest again, as I did in my post on Church, that I think it’s hard for us, jaded as we are by lifelong exposure to billboards, movie screens and other large scale images, to appreciate how much of a dazzling “special effect” was created at the time by large scale paintings like his, many of which were 8 foot by 10 foot (2.4m x 3m).

Bierstadt was often put down by critics of his day (and is still looked down on by contemporary critics) for the overly dramatic nature of his work. While I’ll admit that he didn’t pull any punches when it came to dazzling viewers with exaggeratedly rugged and “scenic” vistas, theatrical light, clouds, mist, shadow and other visual effects, in addition to the sheer size of his monumental canvasses, I don’t think that takes away from the enjoyment of his paintings.

In fact those elements are the great thing about his paintings, drama is the point (but of course, “serious” critics aren’t allowed to put their blessing on anything fun). Bierstadt had the last laugh, though, as his work sold for enormous sums. His paintings are still popular today (another problem for critics) and are widely reproduced. Many are readily available online and you’ll find his paintings in numerous books.

If you can, try to see one of Bierstadt’s large scale works in person to get the real effect. The Artcyclopedia has links to some museums with his work in their collections (and online).

Anyone interested in dramatic contemporary matte painting who is not familiar with Bierstadt will find in his work a textbook for how to paint dramatic landscape. The rest of us can just enjoy the journey across the great rugged face of the American west, oohing and aahing along the way.