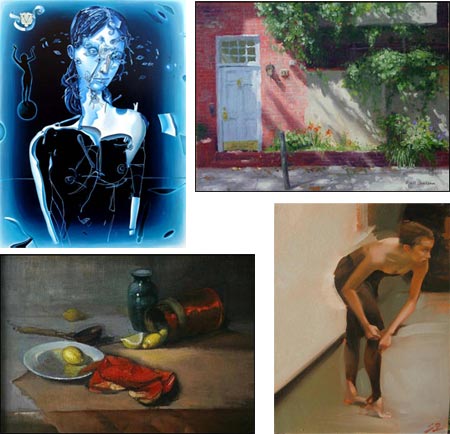 Like many cities, Philadelphia has a “gallery walk” (two of them in fact), in which galleries within close proximity of one another arrange simultaneous openings and encourage an evening of gallery-hopping.

The one in Philadelphia’s Old City neighborhood is one of the longest running organized gallery walk events that I’m aware of, having started in 1991. It was preceded by an “Art Loop” in nearby Wilmington, Delaware, that started in 1988. That event, in turn, was based on a “Music Loop”, an series of actual bar hopping events back in the mid 80’s, arranged between bars and clubs with bands playing on the First Friday of the month in a effort to revive nightlife in a small city that, like so many others, had gone dead after dark.

The Wilmington music loop was successful for a few years, but had a spotty history afterward. The Art Loop, however, continued. Renamed as Art on the Town, it continues today. The Wilmington event has been a bit overshadowed, however, by the larger event in Philadelphia, both of which are held on the first Friday of the month.

Philadelphia has a thriving art gallery area in a section called “Old City”, so named because it is part of the original colonial city on the Delaware River that was integral to the country’s early history. Situated near the galleries are such historic sites as the Betsy Ross House and Elfreth’s Alley.

In an area that had inexpensive storefront rentals among commercial lighting and restaurant supply houses, small new galleries sprang up, supported by their own number and proximity, and enabled by the less expensive rents to be more free with their showings than the established galleries in the posh Rittenhouse Square area. Patterned on the Wilmington event, the First Fridays gallery walk was a natural outgrowth of the concentration of numerous galleries within a few blocks, and it became a distinct success.

The older, more established galleries in the Rittenhouse Square area, who might turn up their noses at some of the young artists featured in the Old City venues, couldn’t ignore the success of the idea, and followed suit several years later with a Center City Gallery Night. This event, though less street festival lively than the one in Old City, is still very worthwhile. It doesn’t have a dedicated web site, but the event is usually listed in the Philly Fun Guide.

The interesting point, of course, for those of you in other parts of the country and the world, is that this kind of event is becoming common in many cities and even smaller towns.

What is not often discussed, and may go unrealized even by praticipating gallery owners and artists, is that this is an amazingly good idea in more ways than one. Not only does it increase foot traffic into the galleries on the night of the event and expose the artists’ works to a larger number of prople, it accomplishes something on larger scale that is even more important and remarkable.

I think many gallery owners and artists would be surprised at the number of potential art buyers who are intimidated by galleries.

Unlike normal stores, in which you feel free to come and go while “browsing”, galleries often have a aura of societal stratification. This is intentional in many cases, to appeal to the exclusivity that is so attractive to the moneyed classes who can afford expensive art, in part specifically to display their wealth and “taste”; but it can impose a barrier of discomfort at the lower end of the art buying spectrum.

Inexperienced individuals can feel put off by the library-like stillness and frequent emptiness of galleries; in which you’re often in an intimate space with whoever is tending the gallery, and the resultant feeling of scrutiny or expectation that you may not be welcome if you’re not a “serious buyer”.

Few city galleries have the casual feeling of a traditional shop for, say antiques or furniture, and that “exclusive restaurant” kind of social barrier, and the “if you need to ask you can’t afford it” pretensions of some galleries can definitely be off-putting.

Gallery walks present art in a festive, come and go as you please, mingle with the crowd, kind of event that breaks down those barriers and makes it easy for young, inexperienced buyers to view art, and the galleries themselves, in a non-threatening atmosphere.

This is one of the advantages of outdoor art fairs as well, but quality is often an issue there. It is, however, one of the best things about artists and galleries presenting work on the web, the ultimate non-threatening, comfort of your own home, way to view anything.

It sometimes comes as a surprise to young people that they can buy good original art, often by young artists who are very talented but not well established yet, where they might have thought their budget limited them to posters or reproductions.

As always, of course, quality and taste vary, but that’s another of the great things about gallery walks, you’re deliberately going from gallery to gallery sampling a wide variety of artists and styles.

On either of the Philadelphia events (as well as the Wilmington one) I almost always find something of interest. Yesterday, for example, I discovered an entirely new gallery, the Qbix Gallery, that is devoted to fantasy art (something Philadelphia hasn’t had since the Michelle and Carl Lundgren’s gallery in Old City folded years ago). Qbix even publishes a small magazine, Q Magazine, which has its own site. Yesterday, the gallery was featuring the Surrealist-inspired work of Ken Vallario.

I even found a new, and quite good, comic book store, Brave New Worlds Comics amid the galleries, always a plus. Independent bookstores have also moved into the area.

At F.A.N. Gallery, I found the landscapes, figure paintings and drawings of Serge Zhukov.

At Artists House gallery, I found the work of several artists who were trained at the Pennsylvania Academy of the Fine Arts. (As a fellow Academy student Bob Walters once told me, “you can always spot an ex-Academy student – if nothing else, they’re drastically competent”.) I was particularly pleased with the still life paintings of Dori Spector (personal site here), and the shadow-crossed landscapes of Scott Jackson (personal site here).

As usual, I took some notes and I’ll write in more detail about some of the artists in the future.

In the meanwhile, see if there is an organized gallery walk in your town, if not, maybe it’s time to start one.

Link: Old City Arts (site is in frames - click on "first fridays" at left or "visual arts" at top)
Philly Fun Guide (listings for Center City Gallery Night)
Wilmington Delaware Art on the Town
Art on the Town on MySpace