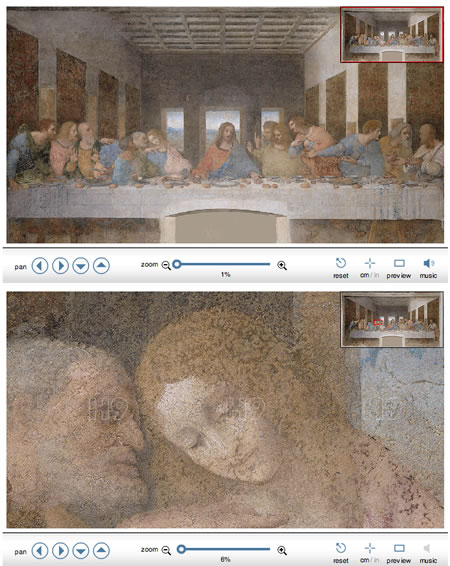 OK all you conspiracy buffs and fans of The Da Vinci Code, here’s your chance to get all up close and personal with the master’s famous fresco from the comfort of your computer chair.

To give you some idea, that’s 1,600 times higher resolution than a typical 10 megapixel digital camera. You can get down to the level of examining individual chips of plaster if you want, but you’ll probably want to stay out at about 6-10% of the potential magnification just to be able to see recognizable parts of the image.

Actually, I find the hi-res version of Pozzo’s ceiling more rewarding to explore this way, flying in and out through his imaginary sky. The controls allow you to immediately turn off the inexplicable music, zoom and scroll, and even tuck the smaller preview window out of the way.

The da Vinci image is unfortunately watermarked, but it’s still fascinating to be able to see it up close. The curator points out: “You can see how Leonardo made the cups transparent, something you can’t ordinarily see.”

Intended to make examination of the painting possible for numerous scholars, particularly amid some controversy about Milan’s ability to protect the work, which has deteriorated seriously, from the city’s severe pollution problem, the image has been made available to the public, and you can zoom, scroll and examine to your heart’s content.

Leonardo reportedly used some experimental techniques in the painting, diverging from the traditional methods of fresco that have made it one of the most durable painting methods known to mankind, with unfortunate results.

For those interested in the pop-culture phenomenon of the Dan Brown’s book and the atrendant movie, you can zoom in on the figure to Christ’s right and see that it is pretty easy to interpret it as feminine. Also, if you print the image out on a vinyl disc and play it backwards on a phonograph, it says “I buried Paul…”.