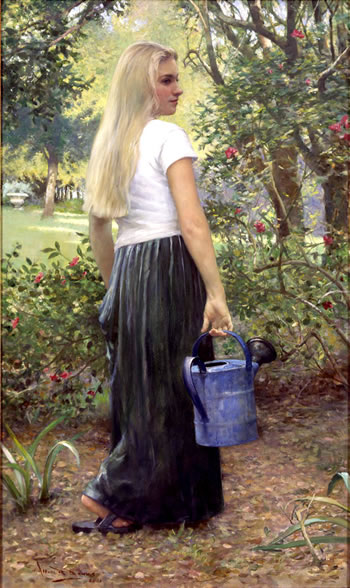 When thinking about “plein air” painting, which is simply a French term for painting out of doors, the thought is naturally one of landscape. More unusual is the practice of plein air portrait painting, as practiced by classical realist painter Allan R. Banks.

The infrequent pursuit of this approach is understandable. The usual controlled lighting and background conditions, employed to make portrait painting easier, are replaced with the much harder to manage background integration (painting essentially a portrait and a landscape) and the fleeting lighting conditions inherent to outdoor painting.

The result of taking on that challenge, however, is a refreshingly different kind of portrait.

Banks works in the tradition of academic painters from the late 19th Century who also did notable figutative works set in landscapes, like Jules Bastien-Lepage and Daniel Ridgeway Knight, as well as “impressionistic” realists like Sorolla and Sargent.

Banks studieed with noted painters Richard Lack and R.H. Ives Gammel and has achieved notice in realist and naturalist painting circles and has for some time been the President of the American Society of Classical Realism. His essay, Clarion Call, from the Classical Realism Journal, is prominently reprinted on the Art Renewal Center, which also features a gallery of his work.

For a number of years his web presence has been a section at classicalrealism.com, which is essentially an extension of the Gandy Gallery.

Those pages have apparently not been updated for a few years, and Banks has a new site at allanbanks.com. Though the new site is notable for having newer works, the older presence is still relevant as the new site is apparently suffering some newbie pains, like galleries without thumbnails and some incorrect links.

One of the problems, though, turns out to be a plus. What I thought at first was a slow sever connection, resulting in glacial page loading even over high bandwidth, turned out to be the result of a common amateur web design mistake of resizing large images in the HTML rather than providing correctly sized images for the pages, linked to larger ones. Also, whoever is doing the site is posting huge, uncompressed BMP files instead of compressed JPEGs.

Much to my delight, however, the images that are posted are large in physical size as well as file size, which is one of the areas where many artist’s sites fail, providing images that are too small to really get a good impression of the work. If you contextual-click on the images on Banks’ new site and open them in a new window, you’ll find many of them are large enough for you to actually get a real feeling for the appeal of his work; which is beautifully handled, rewarding in the details, and surprisingly painterly; characteristics that smaller images don’t reveal.

In addition to his plein air portraits, Banks paints more traditional indoor portraits, plein air compositions in which the landscape is dominant (thought they usually also include figures) and still life.

Banks often chooses the subdued lighting of overcast days or places his figures in shadow, perhaps partially for the easier handling of diffused outdoor lighting which doesn’t change as dramatically in short periods of time as direct sun, but perhaps more to be in keeping with that practice among the artists who have worked in that tradition.