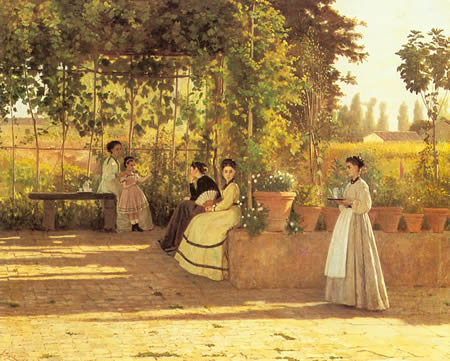 As fond as I am of the French Impressionists, I’m drawn even more to painters at the edges of their circle; painters who were influenced by their approach, like the so-called “American Impressionists”, or predecessors, like Gustav Courbet or Camille Corot and other members of the Barbizon School, who presaged and influenced the Impressionists in their break from the academic traditions.

A little know counterpart to the French artists of the Barbizon school was a group of Italian painters in Florence and surrounding Tuscany called the Macchiaioli (pronounced mah-key-ay-OH-li) who were active around the same time.

The middle of the 19th century was a time of revolution and political upheaval in many parts of Europe, and the artistic revolutions of time were part of the same social fabric. The artists who were most influential in forming the Macchiaioli, however, were directly involved in uprisings, joining other intellectuals and idealists who fought to wrest a united Italian state from the smaller independent areas that were often under the control of foreign powers.

Though that goal was eventually reached, the artists soon realized that their ideal democratic state was not to be a reality (politics is always politics, after all, and personal power trumps idealism), and turned their revolutionary zeal to freeing themselves from the restraints of academic formalism in their paintings.

They retreated to the countryside around Florence, feeling themselves inheritors of the Renaissance that bloomed there, and began to devote themselves to directly capturing the countryside in plein air paintings, using bold patches of color known as “macchia”, meaning splotch or spot, from which the name of their school is derived.

They often worked with a strong chiaroscuro, accented by dappled areas; isolating brighter colors into these spots and leading to effects that seem like sparkles of light.

In their use of broken color, brilliant sunlight, plein air painting and the direct observation of landscape, they were direct forerunners of the Impressionists, though the Macchiaioli received little notice and are only in recent years being rediscovered. Notable members of the circle included Giovanni Fattori, Silvestro Lega and Telemarco Signorini, along with Gusieppe Abbati, Vincenzo Cablanca and others.

I think they are wonderful painters and I’ll try to feature some of them individually on lines and colors in the future.

7 Replies to “The Macchiaioli”