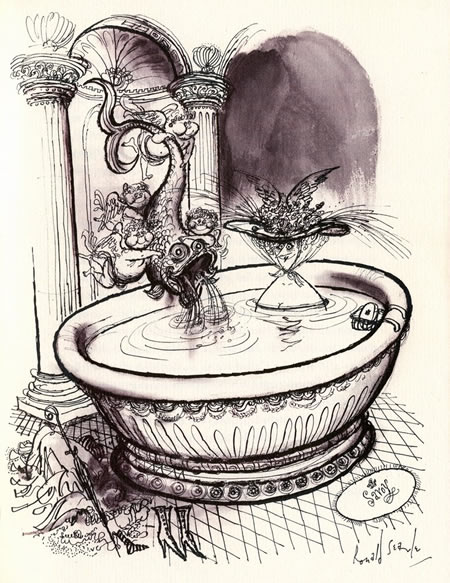 Ronald Searle, the well known English cartoonist and satirist, started drawing cartoons professionally for the Cambridge Daily News at the age of fifteen.

He served in WW II as an architectural draftsman and, while stationed in Singapore, was taken prisoner of war when that city was surrendered to the Japanese. Despite the horrific conditions of forced labor, beatings, near starvation and rampant disease, he continued to draw. He made drawings of life in the forced labor camp while working on the Siam-Burma railway, and hid them under the mattresses of prisoners infected with cholera. He managed to bring some of the drawings home with him after the war, where they were exhibited and subsequently published.

Just before he left for the war, a cartoon panel of his appeared in Lilliput, that was to be the first incarnation of a project for which he would later be renowned, about a girls school called St. Trinian whose students were anything but saintly, stirring up trouble and amusement for years. The St. Trinian’s cartoons became tremendously popular and made his reputation, but Searle eventually got so tired of the project that he had the school blown up with an atomic bomb (though they came back).

He became the regular illustrator for Punch’s theatre column and eventually one of their major staffers. In the meanwhile collections of his cartoons were published in titles like Merry England, Etc., and The Rake’s Progress, as well as the wonderful cartoon travelogue A Paris Sketchbook.

Since then, he produced cartoons and illustrations for numerous publications and many collections were published. A number of his books are currently available on both sides of the Atlantic. There is also a biography by Russell Davies.

Searle went on to do work for Disney and other film studios, producing posters, animation designs and related material. In the early 60’s he moved to France, concentrating more on painting and less on cartoons and illustration, but continues to produce work in all three areas.

Searle has produced a remarkable body of work and achieved a unique status. His subjects are handled with thought provoking whimsey and insightful social commentary that, along with his energetic linework, invites comparison to Saul Steinberg.

Searle’s cartoons can bite through our pretensions as a civilized society, reveal us at our most ridiculous and arrogant and put a smile on your face while doing it.

His lines, at times drawn with a Rembrandt-like calligraphy of thin to thick, waver and wiggle and skitter around his drawings with a frenetic energy that keeps you thinking that they may well fly off the page.

Ronald Searle is one of the all time greats of cartooning. There are several resources around the web, the best of which is a tribute blog, Ronald Searle Tribute, maintained by Matt Jones, a freelance artist working in the animation industry in France. It was Matt’s letter about the blog that reminded me that a post on Searle was long overdue (unfortunately, I seem to have lost his email). This extensive collection of Searle articles and art has been running since May of 2006 and is a terrific resource on all phases of the artist’s work.