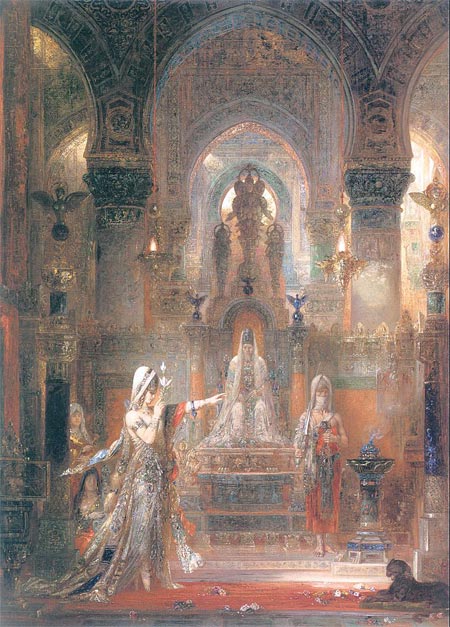 Staring into the dark, bejeweled recesses of Gustave Moreau’s hallucinatory interpretations of a classical mythology that apparently came from some alternate dimension, it’s difficult to grasp the idea that, as respected professor at the École des Beaux-Arts in Paris, he was an influential teacher of Henri Matisse, Georges Rouault and Pierre Bonnard, and hung out with Edgar Degas.

Moueau was generally despised by modernist critics and others, who pointed to his obsessively detailed, elaborately ornate and darkly textured settings, his stiffly posed figures, effeminate males, tragically portrayed females and bizarre interpretations of antiquity and myth, as a prime example of the worst in decadent symbolist art. Degas even dismissed his friend’s attempts to create a vision of an epic past that never existed with “He would have us believe that the gods wear watch chains.”

Of course, the Symbolists and Surrealists loved Moreau for the very same reasons. Andre Breton, the leader of the Surrealist movement, declared that encountering Moreau’s work at the age of 16 “influenced forever my idea of love”, (a bizarre notion which may account for something in Breton’s makeup).

There is a museum in Paris, Musée Gustav-Moreau, in the mansion that was his home and studio. The museum’s online presence has a nice selection of his drawings, which are otherwise underrepresented on the web.

There are books on Moreau, from the expensive to the inexpensive, and you can find him mentioned in context in Michael Gibson’s nice overview of the genre, Symbolism.

Moreau is considered a Symbolist, which is a pretty loose definition, as it wasn’t as much of a concerted art movement as the literary one, but I don’t think he was ever officially allied with a group. He was an influence on contemporaries like the Pre-Raphaelite Byrne-Jones and others. He was also influential on writers. His two paintings of Salomé, The Apparation and Salome Dancing Before Herod (image above) reputedly inspired Oscar Wilde to write his notorious play Salomé in French.

Contemporary comics writer Alan Moore, in the second volume of his wonderful, literary reference packed The League of Extraordinary Gentlemen (not to be confused with the execrable movie nominally adapted from the series) played with the notion that Moreau was the nephew of H.G. Wells’ Doctor Moreau, and had based the form of his more disturbingly chimeric entities on the unfortunate victims of the doctor’s appalling experiments.

Critics, of course, find Moreau’s own experiments equally appalling, and they’re probably right about his weaknesses and excesses; but those of us who are wise enough not to let critics’ finely-honed narrowness of mind interfere with our enjoyment of things can find delight in Moueau’s striking monuments to l’esprit décadent.