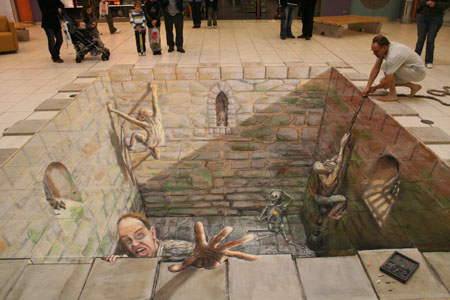 Julian Beever is perhaps the best known “pavement painter”. He uses colored chalk to create complex drawings on sidewalks in public spaces. Like those of his contemporary Kurt Wenner, these sometimes are giant reproductions of old master paintings. The most interesting, though, take the form of large scale anamorphoses, images distorted in such a way that only assume their proper form when seen from a particular viewpoint (or, in the case of mirror anamorphoses, when viewed in reflection on a curved surface).

Anamorphosis has a long history in art, since the time of Leonardo having been used to startle or amuse, or even to hide the subject of an image from casual view. One of the most famous is the anamorphic apparition of a skull in The Ambassadors, a famous double-portrait by Hans Holbien the Younger.

In the case of the sidewalk artists like Beever, the purpose is still to startle and amuse, notably with anamorphic images that form striking three dimensional illusions when viewed from a certain angle, as in the image above.

Beever often poses for photographs, interacting in some way with his three dimensional illusions, in this case, mirrored by a self-portrait in the “foreground”.

Beever’s web site has a number of his images, but in only a couple of cases does he show you the image from other angles, as you would see it in life, to understand the process (see his globe image in my post on Optical Illusion Sites for an example).

Beever most often does his sidewalk art in European cities, where there may be a higher tolerance for impromptu art in public spaces, but he occasionally does do his trompe l’oiel illusions here in the U.S., where they, unsurprisingly, are simetimes in the form of advertising.

Beever’s site doesn’t seem to be updated often, but other mentions of him continue to pop up. Here is a post on Mighty Optical Illusions that features some of his recent work. There are also some videos of his work (and here) and his working process (and here).

See also my previous post on Julian Beever. That post has a attracted a number of comments requesting contact information for Beever. Those wishing to purchase his paintings on canvas or hire him for corporate events can contact him through his web site.