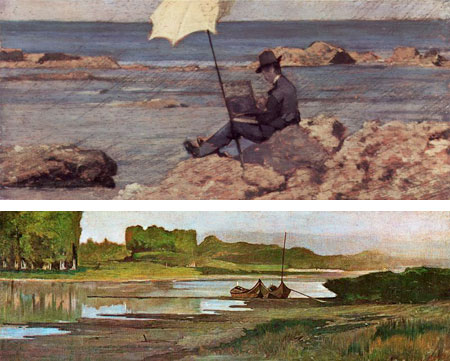 Giovanni Fattori was one of the leaders of the Macchiaioli, a group of Italian painters centered in Tuscany in the mid-19th Century, whose dedication to the portrayal of subjects drawn from everyday contemporary life, practice of plein-air painting, use of bright, fresh colors, and application of paint in rough dabs of color, eschewing the blended finish considered normal for acceptable paintings of the time, predated the French Impressionists by some ten years. (See my previous post on The Macchiaioli.)

Italy was in the middle of a revolution during Fattori’s early years, and the painters of the Macchiaioli were in the thick of it, fighting to create a unified Italy with an idealism that was to be bitterly disappointed, even in victory. Many of the works from the middle of his career are of military scenes, though more of “in-between” times than of actual conflict, images of soldiers mustering, encampments, horses and wagons.

He later devoted himself more to rural and farming scenes in the Tuscany countryside around Florence, and painted sensitive portraits of his family (or families, he was married three times).

These have the fresh, brilliant colors that would be characteristic of Impressionist works, but married with a deep chiaroscuro and academic approach that was absent in their pursuit of the effects of light.

I find the proportion of Fattori’s paintings particularly fascinating, with strongly horizontal or vertical canvasses giving many of his scenes an expansiveness and visual drama not found in the more traditional formats that were common in his day; like his painting of fellow Macchiaioli painter Silvestro Lega painting en plein air at the seaside, and the calm rural scene along the Arno in the images above.

Fattori became an instructor at the Florentine Academy. One of his students was the modernist painter Amedeo Modigliani.

There is a Giovanni Fattori museum in his hometown of Livorno.