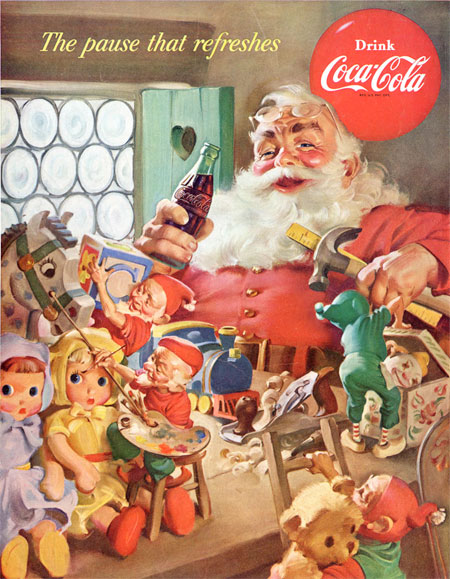 You will find many accounts that insist that Michigan illustrator Haddon Sundblom was responsible for creating the modern image of Santa Claus, providing a friendlier form for the the jolly old elf than had previously been envisioned, at the behest of the Coca-Cola company, who wanted to use him to sell more of their sugary, flavored soda water.

While the latter assertion is true, the former isn’t. The modern image of Santa as a red-cheeked, morbidly obese (according the current surgeon general) and preternaturally friendly old guy in a red suit, with white fluffy beard and cuffs to match, was created by illustrator extraordinaire J.C. Leyendecker. See my previous posts on J.C. Leyendecker (also here, here and here) and Illustrators’ Visions of Santa Claus. [Correction: Actually it’s not as simple as that, as my addendum to my post on Illustrators and Santa points out, though I still feel Leyendecker is responsible for the solidification of the modern vision of Santa, and Sundblom responsible for the ultimate refinement of that image into the character as we know him.]

Sundblom, who was also a terrific and currently underappreciated illustrator active in the early and mid 20th Century, didn’t create that image but did go along way toward continuing, refining and promoting the cultural icon to the benefit of the Coca-Cola company, who wanted a family-friendly, all-occasions image for their “soft-drink”, originally thought of as an alternative for “hard” alcoholic drinks and considered suitable only for similar occasions.

Sundblom created a fresh image of Santa for Coke ads each year from 1931 to 1964, featuring the jolly old guy chugging the “not for Summer only” beverage while in his elf labor camp workshop, leafing through the Big Book of Naughty and Nice (wouldn’t you like to see that one) or out on the road on his trans-global hypersonic toy dispersal run (in the course of which he always found time to stop and lounge on someone’s staircase, or lean against their refrigerator, to enjoy “The pause that refreshes”® in lieu of the more boring Milk and Cookies®).

The Coca-Cola company has a page devoted to Sundblom’s Santa campaign, but they get it wrong too, laying claim to introducing the modern version of Santa to the world with nary a mention of Leyendecker or Rockwell, who had been doing their Santa thing in the pages of the Saturday Evening Post for years before Sundblom’s Santa Appeared. (Gee, an American food-product company making unsubstantiated and inaccurate claims? Shocking! For further reference, I point you to an excerpt from Santa Claus: A Biography by Gerry Bowler.)

None of this detracts from Sundblom, however, who made no such claims and who contributed other well known embodiments of products to the 20th Century’s cultural zeitgeist, like Aunt Jemima (who has recently gotten a political correctness makeover and modernization) and the Quaker Oats Quaker.

Sundblom’s career as an illustrator, though overshadowed by his association with the big guy, was long and influential. He provided illustrations for companies like Ford, Maxwell House and Colgate Palmolive, and publications like the Saturday Evening Post, The Ladies’ Home Journal and Woman’s Home Companion. He also did some nicely teasing “cheesecake” pin-up art (thank you, Santa) for Playboy and others.

“Sunny” Sundblom, as he was often called, was influential on a number of notable mid-20th Century illustrators, like Harry Anderson, Art Frahm, Gil Elvgren and Joyce Ballentine.

One of the best sources on Sundblom’s overall career is on the American Art Archives. Leif Peng’s Flickr set is also good.

If you’re good, maybe Santa will bring you one.