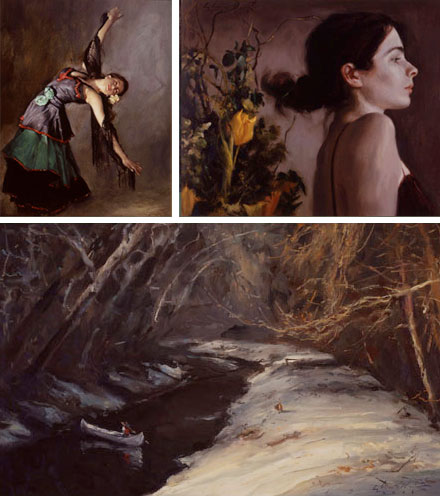 Glenn Harrington’s figures, portraits and landscapes display a painterly approach and fascination with light that reminds me of Sorolla, Sargent, and some of the painters generally called “American Impressionists“, but with the chiaroscuro temperament of Rembrandt and Carravaggio demanding equal time for darkness. Perhaps the most direct comparison I’m tempted to make would be with William Merritt Chase, who exhibited some of those same qualities.

You can see it in Harrington’s evocative portraits, and his masterful figurative works, but I was particularly taken by these characteristics in his landscape paintings, which are simply striking. They are marvels of intertwined light and darkness, in which sun and shadow almost seem to be struggling for dominance.

Though his painting approach uses the fresh, open brushwork of the 19th Century painters who took the influence of French Impressionism and combined it with underlying solidity of Academic painting, he particularly seeks out the dark with the light, eschewing the open sun common among landscape painters for the dramatic spotlighting of overcast skies, in which the sun has managed to punch a temporary rift or find edges around which it can barely seep.

Unfortunately the galleries on his site are arranged in a manner that requires you to hold your mouse over the thumbnail to view the images (which I find particularly annoying, your mileage may vary), and the images themselves are frustratingly small. That said, if you go through a number of his landscape paintings you may come away, as I did, with an overall impression of an emotional quality in the interplay of light and dark, leaving the feeling the what light can be gleaned is precious, fleeting and not to be taken for granted.

Even in those compositions in which broad daylight is present, it must make its way to us through tangles of branches, walls of trees and and thickets as dark as night.

His landscapes of Pennsylvania are often of river, creek and canal-side, possibly of the New Hope area (see my posts on New Hope and Lambertville, Daniel Garber and Fern Coppedge). Harrington’s landscapes of the American South are of a somewhat different nature, and often include wildlife and figures.

His figurative work, in keeping with many of the 19th Century painters, is frequently theatrical, not just in terms of the drama of the lighting, but in the use of costume and unusual dress for the models.

Harrington is also an accomplished illustrator, and brings his painterly approach and chiaroscuro drama to the publications like The New Yorker, The New York Times, and Sports Illustrated, He has also painted covers for numerous books in including classics like Wuthering Heights, Pride and Prejudice, and A Room With a View for which his visual drama is a perfect compliment to literary drama.