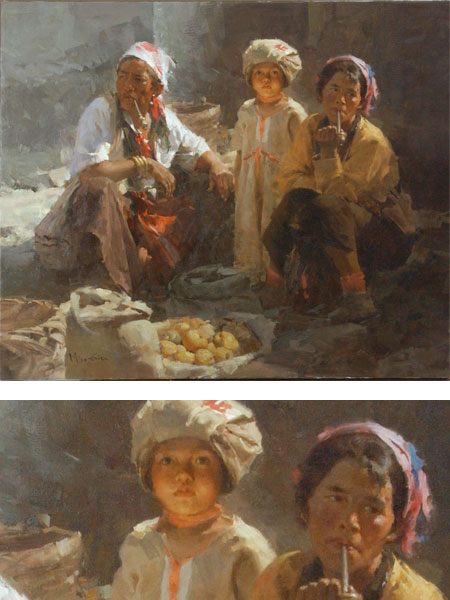 Mian Situ is a Chinese-American painter who was born in Guangdong (Canton), where he trained in a realist European style. I learned from his bio that this style was introduced to China from Russia as Socialist Realism, an inheritor of the 19th Century European Academic painting traditions that flourished in Russia under the Czars.

Situ has tempered that realism with the influence of his ventures into California plein air painting, producing a blend of influences similar in approach to some of the more Academic-leaning American Impressionists, basically a painterly realism. Somehow looking through his work brings to my mind such seemingly diverse painters as William Merrit Chase, Sergi Bongart, Sargent, Sorolla and Daniel Ridgeway Knight.

Situ traveled extensively in his home province in China, studying and documenting the day-do-day look and feeling of life, traditional ways of dress and the visual texture of the time and place, which he understood was rapidly changing.

He has also made a study of the first wave of Chinese immigration to the U.S., particularly in the Chinese communities of San Francisco at the turn of the last century. This is largely the subject matter you will find in the Historical Works section of his web site. The story-telling component of these paintings give them some of the visual charm and emotional appeal of classic illustration, combined with the wonderful textures of the streets, buildings, and clothing that were present in that rough-edged time.

Situ’s fascination with the American West has carried over into his landscape paintings, which are more straightforwardly modern, but still painted with that crisp combination of realism and painterly brushwork.

It is in his Figurative Works that you will find all of these influences coming together, with images from the historical and contemporary American West and the rural communities of China; images that tell stories with dress, location, and most of all, with the emotive faces of the individuals he portrays.

It’s interesting in particular to watch what Situ does with value relationships. Many of his paintings are bathed in light and shadow, or accentuated with sharp value contrasts between shadows and brightly colored or white garments. In many others, however, he keeps his values restrained within a narrow range, for a very different visual and emotional feel.