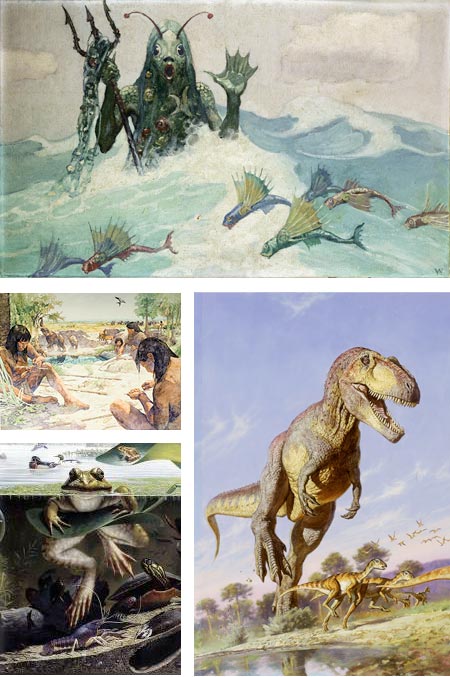 I’ve made the mistake in the past of putting off writing about an exhibition that I plan to go to in the hope of writing a first person account; and as a result wind up telling you about the show just as it’s about to close. I won’t do that this time.

National Geographic: The Art of Exploration, an exhibition of some of the amazing art collected by the magazine in its more than 100 year history, has already had a run at the Norman Rockwell Museum, where it originated and was curated. It is now a traveling exhibit and it opens at the Allentown Art Museum in Pennsylvania this Sunday, January 27, 2008, and runs through May 25.

National Geographic, a magazine noted for its stunning photography, also has a long history of hiring some of the nation’s best illustrators to portray what the camera cannot, whether peering into the mitochondria of a cell, reaching out into the depths of space, looking over the shoulders of participants in historic events or penetrating the mists of prehistory.

Some of the best examples of that art, over 100 works, have been selected from the thousands of pieces in the magazine’s archives and arranged in an exhibit that spans not only the history of National Geographic, but the history of civilization and history of the natural world; not to mention the history of 20th Century illustration.

Among the artists represented is James Gurney, the author/artist of the beautifully illustrated Dinotopia series (see my posts about Gurney here, here and here), who will be making a personal appearance at the Allentown Art Museum in conjunction with the exhibit on March 9 from 12-4pm.

Gurney has several pieces in the exhibition, including the dramatic portrayal of the Argentinian dinosaur Giganotosaurus shown above, bottom right, which accompanied the article Uncovering Patagonia’s Lost World for the December 1997 issue of the magazine.

Gurney is featuring a piece about the making of this painting today on his always-fascinating art blog Gurney Journey.

The Allentown Art Museum is at 31 North 5th Street in Allentown, PA. Allentown is about 35 miles Northwest of Philadelphia, and less than an hours drive from there via the PA Turnpike extension. Here is an article from the local paper about the show: Magazine’s images a feast for curious eyes, and another with a list of related events.

2 Replies to “National Geographic: The Art of Exploration”