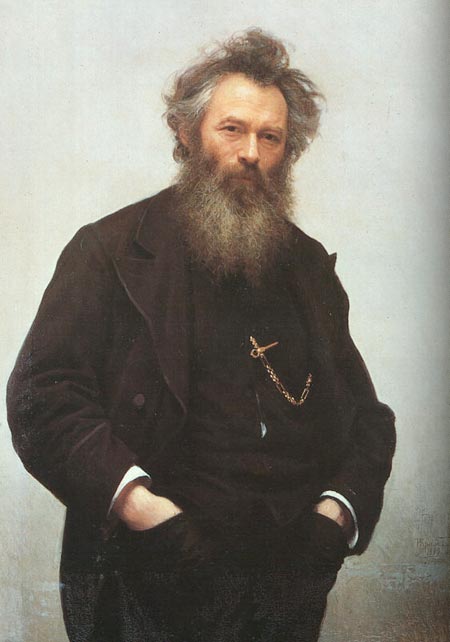 Ivan Nikolaevich Kramskoy was the leader of the 19th Century group of Russian realist artists known as the Peredvizhniki, (in English the “Itinerants” or the “Wanderers”), who mounted joint traveling exhibitions in protest of the restrictive policies of the official Russian Academy (somewhat parallel to the French Impressionists’ participation in the “Salon des Refusés”).

Members of the Society for Traveling Art Exhibitions, as it was formally named, were among Russia’s finest painters, not only of the time, but in general. Among them were such notable figures as Ilya Repin, Vasily Surikov and Ivan Shishkin.

Kramskoy was primarily a portrait artist, and his portraits are quite remarkable; they can feel formal at times but at other times can be penetrating to the point that they seem to be painted from the bones out.

They were not limited, however, to one strata of society, as is often the case with portrait painters. Kramskoy’s portraits included royalty, peasants, family members, actors, writers (like Leo Tolstoy) and a number of portraits of his fellow Itinerants artists, including several portraits over time of painter Ivan Shishkin (image above).

Kramskoy’s portrait session with Leo Tolstoy, who was initially reluctant to have his portrait painted, resulted not only in the incisive painting, but in Kramskoy serving as the model for Tolstoy’s character of the portrait artist Mikhailov in Anna Karenina.

Kramskoy and the Itinerants were tremendously influential on the course of Russian art, and their work, along with the academicism they turned away from, formed much of the realist foundation for Socialist Realism.

Kramskoy’s own leanings were democratic, an important movement in the later part of the 19th Century in Russia, and he was an art critic and theoretician as well as a painter and teacher.

Though he painted his portraits from life, he painted a few portraits of an individual he did not meet directly, at least in the usual sense. He said of his his hauntingly visceral portrayal of Christ in the Wilderness (detail here), that the image appeared to him as a vision of almost hallucinatory intensity, and he painted it without reference to a model.

Kramskoy’s most famous painting is a portrait of an Unknown Woman, whose enigmatic gaze and uncertain origin made her the subject of much speculation, and, eventually, adulation by the Russian public, who came to see her as a symbol of themselves.