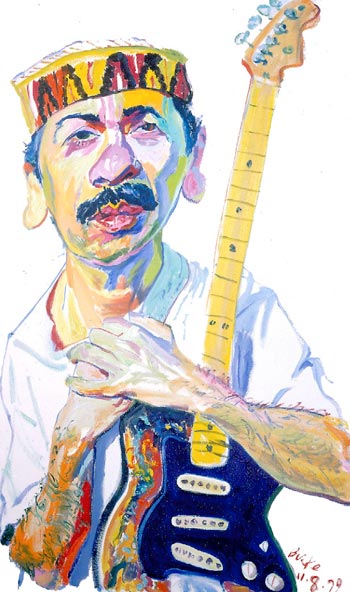 Philip Burke is another of those artists whose images are more commonly known than his name. Whether you’ve heard of Burke or not, you’ve probably seen his his wildly exaggerated portraits of rock stars, splashed with lurid colors and jumping out at you from the pages of popular magazines with expressionistic abandon.

His work has been on the covers and interior pages of publications like Time, Newsweek, The New Yorker, Vogue, Sports Illustrated, The New York Times, TV Guide, Fortune and, of course, Rolling Stone, where he was the featured artist for several years. You’ll find a major section devoted to his work in the collection Rolling Stone: The Illustrated Portraits.

Burke’s portraits cover a range of public figures from entertainment, sports and politics, but his real love seems to be those in the music culture, from James Brown to the Beatles to David Byrne to Miles Davis to Carlos Santana (above).

If you go to www.philipburke.com, it resolves to the “official” site of L.B. Madison Fine Art, presumably his rep. There is a broad cross-section of Burke’s work here, arranged in various ways, along with a bio and other information. Unfortunately the images are watermarked; though most of them are not defaced to the point where you can’t at least get a feeling for the original image.

There is also an unofficial gallery on A Feast of Crumbs on which you can see the images without the intrusion of watermarking.

Burke does more than take the usual caricaturist’s license with the shape and placement of his subject’s features. Though his portraits can sometimes be less exaggerated, they are often wildly sculpted into outrageous forms, giving a real push to the psychological implications that you can read into some of them.

His colors are also “pushed”; brilliant contrasting hues seem to fight amongst themselves for dominance in their attempts to define the forms, each pulling their own way but somehow working together in the final image to snap into the clear focus of of the portrait. Remarkable.

Addendum: Thanks to Dale Stephanos for a link to this post from Stephen Kroninger’s blog in which he posts a wealth of early work from Philip Burke.

Link: www.philipburke.com
Gallery on A Feast of Crumbs