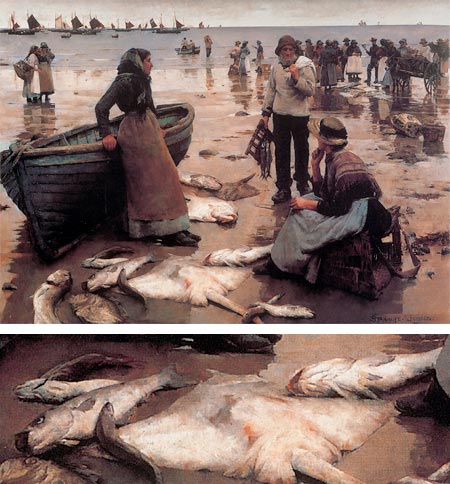 Stanhope Alexander Forbes was an Irish painter who was considered to be the leader of the Newlyn School of painters. This was more of a loose artists’ colony than a concerted school of painting style.

Forbes studied under John Sparkes, and then enrolled in the Royal Academy School, where he briefly studied with Frederick Lord Leighton and Alma Tadema.

He continued his studies in France, where he came into contact with some of the French painters who were beginning to paint “en plein air”. He would eventually devote himself to the demanding practice of plein air figure painting, composing large scale canvasses, often with multiple models, that sometimes took months to complete.

He moved back across the channel and, looking for a place that afforded good light, abundant scenery and village life to paint, settled in Newlyn, which was convenient to Penzance, Cornwall. The new railway station there allowed easy travel to London and its galleries.

Other artists were attracted to the area for the same reasons, similar to the way plein air artists of the time were in France attracted to Barbizon, near Paris, in the US to New Hope, Pennsylvania, near Philadelphia and various places in California that were also accessible by rail.

In Newlyn, Forbes painted outdoor scenes of working fishermen and village life, and when the weather was inclement, painted indoor scenes. He usually had at least two paintings in progress at any time, one outdoors and one indoors.

Forbes is often credited as the father of the Newlyn school, and was the most renowned of the painters working there at the time. His style never became “impressionistic” but his brushwork loosened as time went on, and he was devoted to the qualities inherent in plein air painting, saying it afforded “…that quality of freshness, most difficult of attainment by any other means and which one is apt to lose when the work is brought into the studio for completion”.