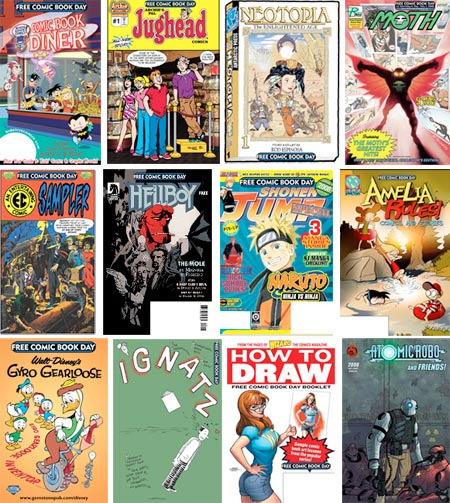 Comic book stores around the U.S. are giving away free copies of comics that a variety of publishers have created just for the occasion.

Aside from the obvious pleasure of picking up a free comic (or two, or more, depending on the store), is the nature of the event. This is the day when the normally somewhat insular and geeky world of comic book specialty stores open up their doors extra wide to those not normally exposed to the mysteries and wonders within.

The proprietors comb their hair and put on a tie (figuratively speaking) and are on their best behavior, expecting to greet newcomers to the world of modern comics. Many stores will use the occasion to simultaneously hold sales and events, including hosting guest artists and book signings.

If you’re even remotely curious about the state of modern comic books, a field that is growing and changing rapidly in many respects, but haven’t felt particularly comfortable wandering into a shop (some of which can often feel more like a private club for geeks than a regular bookstore), here’s a chance to wander through one as if it was a sidewalk sale (which it may well be for the occasion).

Chat with the proprietor, ask what’s different and unusual. Tell them what you like and see if they can suggest a comic title (free or otherwise) that’s up your alley.

The free comics themselves always vary in subject, quality and direction of interest. The good news here, and about comics in the U.S. in general, is that it’s not all superheroes. Despite the interest generated by the continuing popularity of the genre in other popular entertainment, as evidenced by the new Iron Man movie, the market for non-superhero material in the the US has increased dramatically with the rise of the new crop of graphic storytellers and independent “graphic novels”.

(Don’t get me wrong. I’ll point out again that I really like superhero comics, I just think it’s unfortunate that they are so predominant that many people think that’s all modern comics have to offer.)

You can see a list of the comics being offered here. There are two lists, which they’re calling Gold Books and Silver Books. The former are more mainstream and are available at most participating shops (while supplies last), the latter are more varied in subject and approach and are more likely to be found at comic book stores that carry more independent, small press and foreign comics to begin with.

These shops are preferable for those interested in the variety that modern comics have to offer. Even if you’ve been to a comic book specialty store before, you may not have seen a good representation of what’s actually available. Some smaller shops only carry the most popular mainstream titles, and are less likely to offer a variety of non-superhero material.

You can find a list of participating comic book specialty stores in your area using the Free Comic Book Day Store Locator. You may find that some stores, like the one I shop at, carry much more than just comics.

Note: Once Free Comic Book Day is past, you may still find it continues unofficially for several days or more, as many shops still have some of the free comics on hand; and more importantly, maintain their attitude of wanting to welcome and make comfortable newcomers who are tiptoeing into the unexplored landscape of modern comic books.