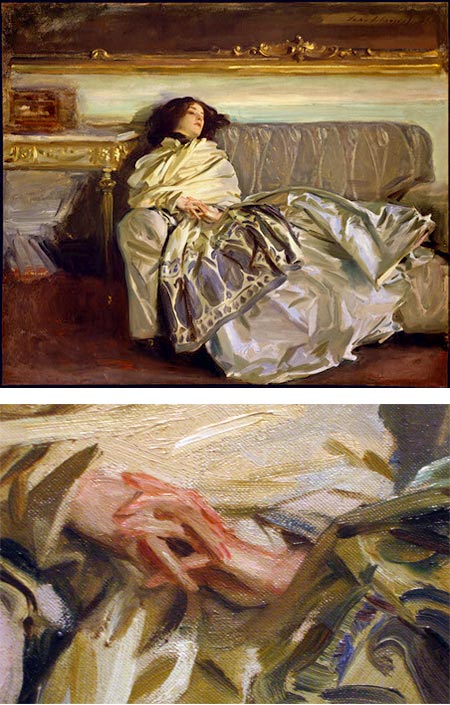 This was essentially my response when I first encountered the work of John Singer Sargent back in my art school days.

I was disappointed, though, to find that the art history books treated him with less regard than I expected. “Facile”, “highly skilled” and “renowned portrait painter”, seemed to be the best they could say of him. I would read the discussions of the great painters and constantly be frustrated to find him not on the list. “Oh yeah”, seemed to be the consensus, “one of those late 19th Century painters who was all technique and no substance — not important in the grand scheme of things”.

I eventually figured out that the late 20th Century art establishment had a bug up its collective ass about 19th Century Academic art in particular, and that in a world where “flatness” was a pinnacle of achievement, and white on white conceptual abstracts painted on 12 foot canvasses with paint rollers were trading for millions of dollars, “facile” was a bad word; and that “substance” and “important in the grand scheme of things” meant “leading up to modernism”.

As I gained the knowledge and confidence to form my own opinions, and understand that the “experts” were often idiots, I realized that my initial impression of Sargent was a true one.

Of all of the great painters I have come to admire over the years, two are at the top of my list of personal favorites, Vermeer and Sargent.

The more I learn about painting itself, the higher my regard for Sargent becomes, and I consider him one of greatest painters in the history of Western art.

The art snob intellectuals will still turn up their nose at this, of course, but as the froth of modernism has receded in recent years, and some semblance of balance has returned to the art establishment, Sargent’s star has risen again.

He also gets knocked because he was a society portrait painter, which of course is a crime similar to engaging in “commercial art” or (horrors!), illustration. Sargent himself eventually got tired of his parade of rich sitters and the limitations of pleasing the upper class with pictures of themselves, but in the course of painting portraits, he was painting the visual world.

I have to admit that his paintings on the surface are not infused with great emotion or drama, he seems as unconnected to his sitters as those he painted in groups seem to each other. By accounts Sargent apparently did not have strong ties outside his family, but it is not in the emotional character of his faces and figures that I find the passion in Sargent’s work, it is in the painting itself.

If you approach Sargent’s portraits as “living still lifes” or “interior landscapes”, you may begin to see what I mean. Look at the folds in a dress, the way soft interior light bounces off valleys of satin, glowing with subtle but intense colors, like a misty Impressionist garden in the rain. Look at the textures of cloth, hair and skin; the rose colors where blood vessels are close to the surface in noses and cheeks; the sweep of light through dark interiors and the interplay of varied-colored brushstrokes, swaying back and forth with the rhythm of some distant symphony…

Here is Sargent’s passion, not found in his bored dilettante subjects, but in spite of them, in the act of painting itself. Yes, there is romance and drama in Sargent’s work, but it is less in his images than in his brushstrokes. If you go to look at Sargent’s oil paintings, get up close.

The painting above, Nonchaloir (“nonchalance”, sometimes titled as “Repose” – larger reproduction here), is a non-commissioined portrait of Sargent’s niece, now in the National Gallery of Art in Washington, D.C.. Even as family, her individuality is lost in his exploration of splashing light, rich, subtle color and the dance of his brush.

Sargent was considered an American painter, though he was born in Florence to American parents and spent most of his working life in Paris and London. He studied in the Paris atelier of the well known portrait painter Emile Auguste Carolus-Duran, and took drawing classes at the Ecole des Beaux-Arts. (If you haven’t seen any of Sargent’s charcoal drawings, look them up. There is a nice inexpensive book of them from Dover Books, Sargent Portrait Drawings.)

Sargent took inspiration from Valázquez, the painter’s painter, and some of the wonderfully facile Baroque portrait painters like Anthony van Dyck and Thomas Gainsborough; looking back to the inspiration of the past when the art world was beginning it’s mad, blind dash for the future. Even critics of the time began dismissing him as irrelevant.

He became tremendously successful as a portrait painter, though he scandalized the conservative art establishment with his notorious portrait of “Madame X“, (Madame Gautreau), a famous painting that he gave to the Metropolitan Museum of Art in New York.

Sargent, like many of the so-called “American Impressionists” whose work I particularly enjoy, took influence form the French Impressionists. Sargent visited Monet at Giverny and associatied with others in the circle; but like the other “American Impressionists”, didn’t share the need the rebellious French painters felt to reject the traditional underpinnings of academic drawing and representational solidity, resulting in a wonderfully free blend of draftsmanship, color, and loose, painterly brushwork.

Sargent eventually abandoned his society portraits and devoted his later career to traveling and painting, largely in watercolor, a medium in which he was as stunningly accomplished and “facile’ as in oil. (See my previous post on Sargent in Venice.)

Happily, Sargent is in vogue these days and there are lots of great resources, both online and in print.

One of the best online resources for Sargent is the John Singer Sargent Virtual Gallery. Though the organization is not as convenient as you might like, there is a great deal of information and lots of wonderful art to be found here.

Sargent’s resurgence of popularity has resulted in a number of fine books over the past several years. Here are some of the ones on my shelves:

John Singer Sargent by Kate F. Jennings is a good place to start, it’s absurdly inexpensive ($10) and this slim but oversize book is filled with large scale reproductions.

John Singer Sargent by Carter Ratcliff is large and informative (you may be able to find it less expensively used), and has some nice details, though some of them are in black and white (which can be instructive in itself).

John Singer Sargent by Trevor Fairbrother has a nice cross section of oils, watercolors and drawings, and the text is a good overview of the painter and his work.

John Singer Sargent: The Sensualist, also by Trevor Fairbrother, is one of my favorites, and speaks, I think, to some of what I see in his passion for the visual world.

The Watercolors of John Singer Sargent by Carl Little is beautiful. No painter of representational watercolors should be unaware of it.

The best resource, though, if possible, is to see if there are works by Sargent in a museum near you, and put your nose up to one.

Whatever else you may say about John Singer Sargent, one thing is undeniable:

It’s brimming with links to articles, bios, online galleries, Flickr photo sets, YouTube videos, Amazon book listings and descriptions, art galleries and museums, exhibition listings, portrait resources, geographical places associated with the artist, drawings and sketches, Del.icio.us bookmarks, and blog posts; including several on her own excellent art blog, Making a Mark, on which she initiated a John Singer Sargent Project to call on her extensive circle of internet contacts to help assemble the material in the course of a month long study of the artist.

Along with the John Singer Sargent Virtual Gallery, the most comprehensive resource on Sargent I’ve seen.