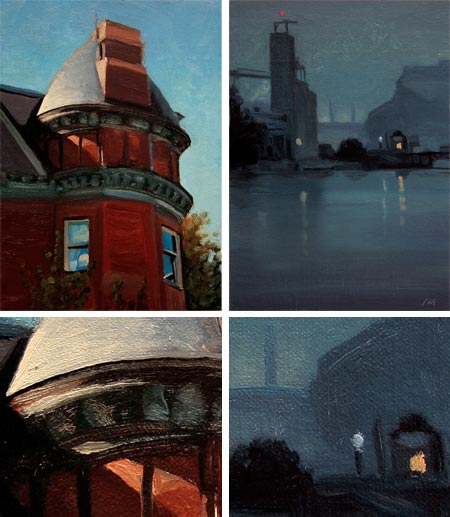 Stephen Magsig is a Detroit painter whose blog, Postcards from Detroit, is a “Painting a Day” style painting diary inspired by pioneering daily painters Duane Keiser and Juilan Merrow-Smith.

Magsig focuses on urban landscape, and most of his paintings are of urban scenes in Detroit and New York, where he is a part-time resident. He studied at Ferris State College and the College for Creative Studies, but considers himself essentially self taught as a painter.

His large scale gallery paintings are almost photo-realist in approach, but his smaller, more immediate works have a wonderfully painterly quality that works particularly well for his subject matter of industrial scenes, abandoned buildings, empty houses and architectural details.

There is something particularly appealing about the way Magsig applies his paint in quick, brusque strokes that seem to have a texture just right for the rough surfaces of the neglected buildings and weathered industrial structures he revels in portraying.

I particularly enjoy his Hopperesque portraits of abandoned houses, sometimes boarded up, surrounded by weeds, and surprisingly rich in color. I also like his beautiful industrial nocturnes, reminiscent of Whistler’s atmospheric images of the River Thames. You’ll also see echoes of Charles Sheeler’s industrial geometry in Magsig’s angular compositions of smokestacks, factory walls, bridges and gantries.

When browsing through his site, you’ll find more variation as you go back in time, with occasional forays into still life and traditional landscape. Be sure to click on the blog images to get to the large versions in which you can see the texture and application of the paint.