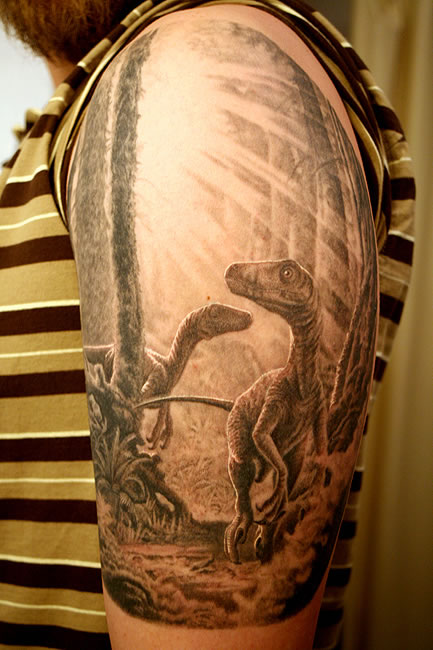 Quick, think of a subject for a tattoo!

Did an image of a skull come to mind?

I mean, skulls can be cool, and I’ve seen some rather amazing skulls in the course of looking at tattoo art, but if you see enough tattoos, you begin to get a feeling of “C’mon now, how many &@$%#! skulls can we look at?”.

Well, what if the skull was a scientifically accurate Australopithecus skull, or a triceratops skull? Now we’re getting into interestingly different territory.

Carl Zimmer is a science writer, a contributor to the New York Times, National Geographic, Science and Scientific American; as well as the author of six books on scientific subjects.

In addition to his blog, The Loom, “a blog about life, past and future”, Zimmer has developed a fascination with scientists who have tattoos related to scientific subjects, and writes another blog, Carl Zimmer’s Science Tattoo Emporium in which he posts about this novel topic.

Didn’t think of geeky scientists as likely to offer up their bodies as canvasses for tattoo art? Think again.

The choice of a tattoo, an image to be permanently (in essence) inscribed on the wearer’s body, is undeniably a reflection of that person’s self image, or ideas of what is important, enjoyable or of primary interest. Scientists, it seems, often choose subjects that attempt to distill the essence of some concept or idea that they feel is central to their take on the natural world and its varied phenomena.

In Zimmer’s posts you will find tattoos of diatoms, galaxies, prehistoric cave paintings, microscopes, fossils, geometric solids, logarithmic spirals, scientific laws and maxims, chemical formulas for lysergic acid diethylamide and valium, maps of the solar system, carbon atoms, dna structures, partial and complete renderings of the periodic table of the elements, mathematical formulas for quantum physics, fluid dynamics and the golden ratio, Dawrin’s ship, the ascent of man, apes, lizards, fish, squid (with anatomical labeling), jellyfish, trilobites (always a favorite of mine), all manner of other animals; and, of course, dinosaurs.

The above image is a tattoo of Dienonychus sported by University of Alaska geology student Jeremiah Drewel.

[Link via The Ink Nerd}