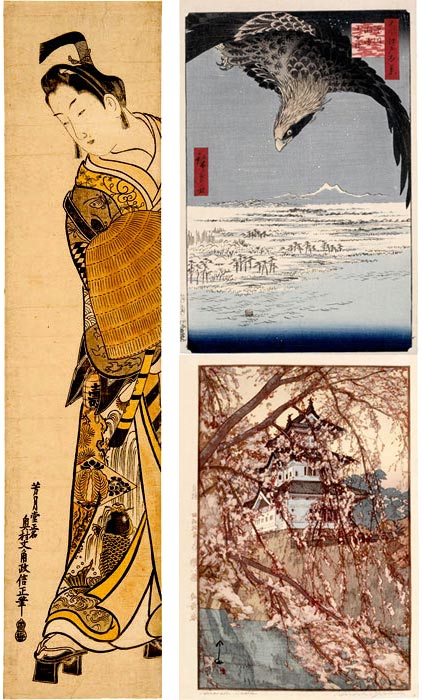 The Blanton Museum of Art, part of the University of Texas at Austin, is currently showing Exquisite Visions of Japan, which is an exhibition of Japanese woodblock prints from the James A. Michener Collection of the Honolulu Academy of Arts.

Though the online image gallery on the museum’s site is minimal, it provides a nice jumping off point for revisiting some of the extraordinary Japanese woodblock print artists I’ve written about before, including Hiroshi Yoshida, Kawase Hasui, Katsushika Hokusai and Ito Shinsui; as well as looking for links for some artists I have not yet written about, like Utagawa Hiroshige, Hiratsuka Unichi, Okumura Masanobu, Katsukawa Shunsho and Kitagawa Utamaro.

Many of these artists are associated with the genre known as Ukiyo-e, or pictures of the “floating world”. (As I mentioned in my post on a recent exhibit of work from the Utagawa School at the Brooklyn Museum, the “floating world” is not what you might think on first hearing the term.) Others are associated with the “shin hanga” or “new print” movement.

These artists were tremendously influential on European artists in the late 19th and early 20th Centuries, particularly the Impressionists and others like Whistler.

Unfortunately, my knowledge of the history and relationship of these artists and their times is frustratingly minimal. You will also have to forgive me if I am inconsistent in the order in which I use the artist’s family and given names, as this varies in listings and the naming conventions are unfamiliar enough that I’m never quite clear about which is which.

I do know that some of these works are among the most beautiful prints I’ve ever encountered. Particular favorites of mine are those of Hiroshi Yoshida and Kawase Hasui.

Link: Exquisite Visions of Japan at the Blanton Museum of Art (to August 24, 2008)

Some links for other artists I have not written about yet:
Utagawa Hiroshige (Ando Hiroshige)
Hiratsuka Unichi
Okumura Masanobu
Katsukawa Shunsho
Kitagawa Utamaro

One Reply to “Exquisite Visions of Japan”