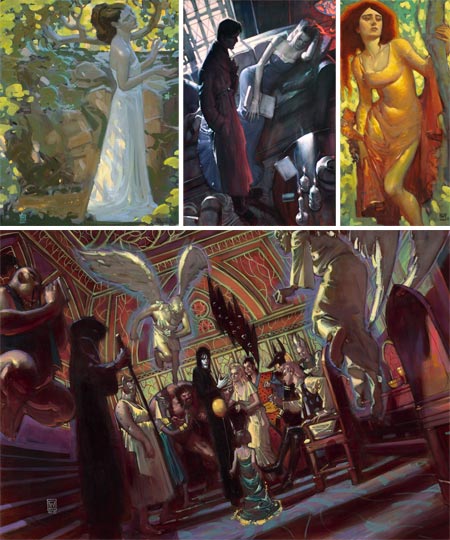 John Watkiss has created visual development art for films like Disney’s Tarzan, Treasure Planet, Atlantis: The Lost Empire, Fantasia 2000, Skycaptain and the World of Tomorrow and the proposed Sandman. In his movie related career he has done work for Twentieth Century Fox, Dreamworks, Francis Ford Coppola and Ridley Scott Associates.

Watkiss has also had a career as a comic book artist, doing covers and interiors for D.C., Marvel and UK publishers on titles like Batman, Conan, Deadman and Sandman.

If that isn’t enough, Watkiss also is a gallery artist. His subjects are frequently images of women painted in a modern style but in costume and compositions influenced by Victorian painting.

You can see a mixture of his film development and gallery work on his blog, though not much of the work for comics. There are unofficial galleries of his comics work on ComicArtFans and Comic Art Community.

On his blog, there are some visual development paintings for a prospective Sandman movie on this page. Despite the huge red “SOLD” across some of them, clicking on them still takes you to viewable images (image above, bottom).

Watkiss has taught anatomy and other art subjects at Royal College of Art in London, as well as other schools. He is the author of several books on anatomy. These don’t seem to be available through the usual online bookstores, but can be ordered directly from the sidebar of Watkiss’ blog. Watkiss has a drawing approach that combines fluid linework with strong underlying geometry, reminiscent of George Bridgeman or Andrew Loomis. Students of figure construction may see a similarity to Burne Hogarth as well.

The books had a dedicated site at one time, and there was also a site devoted to his gallery art, but he seems to have dropped those in favor of the bog.

There is still a site dedicated to his gallery art, a different one, The Works of John Watkiss at seventhsealproductions.com, I don’t know if it is directly connected to Watkiss or not. Here you will find his Pre-Raphaelite influenced paintings of women in (and out of) classical gowns and idyllic settings. These are my favorites of his, in which subjects and styles we are used to seeing rendered with a high degree of finish are given a lighter, more gestural approach.

There is a YouTube video of a “Levi’s spec ad featuring John Watkiss” that Marcel Duchamp fans in particular may find amusing.

A new solo exhibition of Watkiss’ work from all three aspects of his career opens on August 2nd and runs to August 10, 2008 at Gallery Nucleus in Alhambra, California.