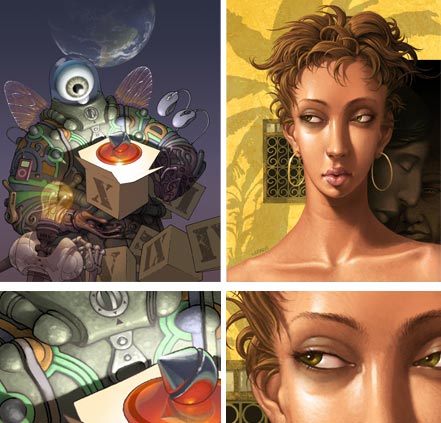 Caparo studied graphic design at the High Institute of Design in Havana and devoted much of his early career to design, but gradually sifted his focus to illustration.

He has a muscular, energetic style that uses texture and tonal contrast to make his images pop off the page. They are at once realistically dimensional and freely stylized, sometimes in a cartoon-like direction. The result is a visual charm that immediately draws you in, and invites you to linger over the image.

He often opts for a muted palette and dark base tones, allowing him to give theatrical emphasis to key elements with passages of more intense color and lighter values.

Caparo’s images are often accented not only with textural variety, but with visual extras, incidental characters and little details.

I’ve found little information about his overall technique, but I know that some of his images are digitally painted, if only from their presence in his gallery on CGSociety.

There is also a Antonio Javier Caparo gallery on the new Tor Books site that I mentioned in a recent post, and a more extensive one on Shannon Associates, along with a brief bio.

Caparo has also done some comics work, notably for the American version of Heavy Metal magazine, and apparently still keeps his hand in as a graphic designer.

Outside of the online galleries mentioned above, Caparo doesn’t appear to have dedicated web site, but he started a blog just last month.

His latest book illustration project is The Magic Thief by Sarah Prineas, for which he created characters, places, animals, decorations, a typeface and maps for both the book and an interactive minisite devoted to the book on the Harper Collins site.