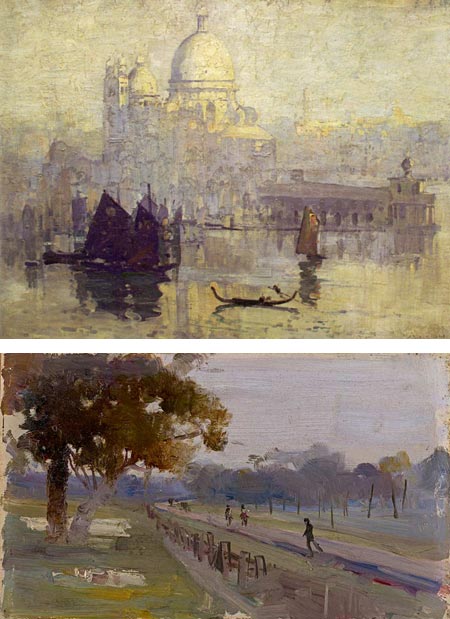 The practice of painting outdoors (or en plein air, see my recent post on pochade boxes), spread from France, where it first came into wide practice, to other parts of Europe, America, and other parts of the world, largely through the impact the French painters had on artists from other countries who came to the artistic centers of Europe to study.

Arthur Streeton was an Australian artist who, along with a small group of contemporaries, brought the practice, and the influence of the French Impressionists, to his homeland.

Largely self-taught as a young man, he became particularly impressed by what he read and saw in photographs of the works of the Barbizon School of French painters, particularly Corot, and later became influenced by the Impressionists, who inherited the practice from their Barbizon mentors.

Streeton’s formal study was at the National Gallery of Victoria School, and he went on plein air painting trips on the areas surrounding Melbourne. He joined groups of like-minded artists working in artist camps in Box Hill and Heidleberg (Victoria).

Along with Tom Roberts and Frederick McCubbin, he participated in the first show of Impressionist influenced works in Australia. The show was called the “9 by 5 Impression Exhibition” and consisted largely of plein air paintings on cigar box lids of that size (image above, bottom).

He eventually returned to Australia and became one of the most notable and successful of Australian artists.

His bright, fresh color and lively brushwork are evident in both his cigar box sketches and his larger finished work.