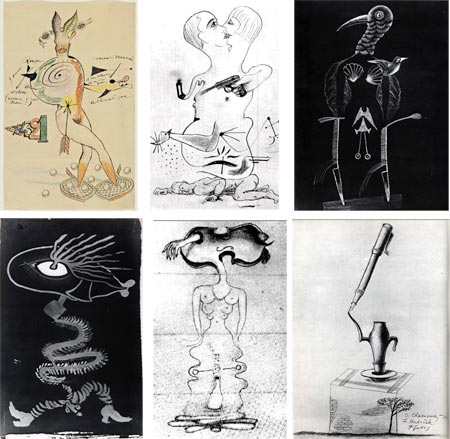 When I was in grade school my friends and I, particularly those of us who considered ourselves “artists”, played a game with no name; in which we would fold an elongated piece of paper in thirds or quarters, and take turns drawing parts of a figure.

The first participant would usually start by drawing a head on the top third of the paper, leaving two lines indicating a neck extending slightly below the fold into the middle third of the paper. The top third was then folded under so that it couldn’t be seen, and the paper handed off (usually surreptitiously in the middle of class) to the next participant, who would then draw a torso, likewise leaving two lines indicating a waist extending over the fold into the bottom third of the paper for the last artist, who would add legs and feet (or some bizarre substitute for them). The variation was a paper folded in fourths, in which the waist and upper legs are separate from the lower legs and feet.

It wasn’t until the last part was added that the paper was unfolded and the work of the other participants revealed, that the final figure seen in all its collaborative glory.

As young as we were, our artistic collaborations usually involved grinning, slobbering monsters, Frankenstein monster heads, superhero torsos, dinosaur tails, webbed feet and the like; but it was a fun game; and looking back, surprisingly creative and imaginatively liberating.

It wasn’t until I discovered books on Surrealism lurking in the dark corners of my high school library (changed me forever) that I found that the Surrealists had indulged in the same game; and had codified it and given it a name, “le cadavre exquise”, or “the exquisite corpse”.

The phrase was taken from one of the results from an early session in which they played a verbal version of the game (based on an earlier parlor game called “Consequences”), in which parts of phrases are written by the participants without knowledge of the other’s input. Their session yielded the phrase: “Le cadavre exquis boira le vin nouveau.” (“The exquisite corpse will drink the new wine.”).

Provided the participants aren’t inclined to cheat, this can be done by mail; and recently, of course, these collaborative artworks can be assembled digitally. There have also been variations in music, film, video and sculpture.

Photographer Jon Rendell maintains an excellent site devoted to the subject at www.exquisitecorpse.com, including a brief history of the practice by Surrealist leader, poet Andre Breton (Surrealism was primarily a literary movement, at least initially), and a nice Morgue of some of the original Surrealist corpses (from which the images here were taken).

I’ve listed some other resources below to current digital revivals of the practice and other items of related interest.

The best way to explore The Exquisite Corpse, of course, is to get together with your friends, artistically inclined or not, and make some. Only then can the exquisite corpse drink the new wine.

The best exquisite corpse is a live one.