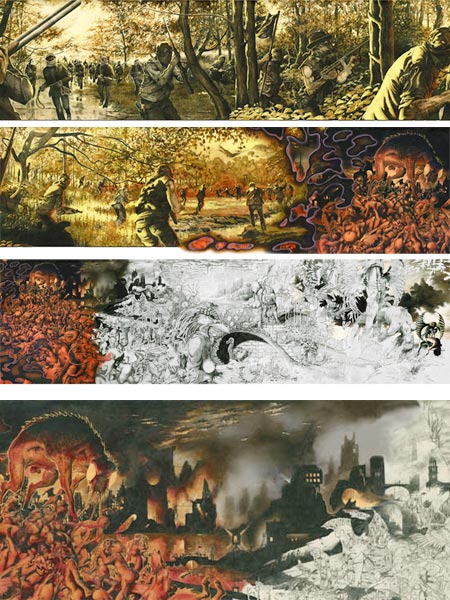 Named for Ah Puch, the Mayan Death God, the never-finished book was to be part comic, part illustrated book. The comic story segments were drawn as a continuous panorama (top three images above, with detail below), a format inspired by the Mayan Codices, which can be thought of as graphic narrative or a kind of comic book.

McNeill worked on parts of the panorama out of sequence, emphasizing the non-linear narrative and in keeping with the story’s time-travel theme. (For more on McNeill and the project, see my previous post on Malcolm McNeill.)

McNeill didn’t know Burroughs or his work when they first started collaborating; initially without meeting, on a project called The Unspeakable Mr. Hart.

The story, which ran in the English magazine Cyclops until it folded, was eventually expanded into the book project. McNeill and Burroughs began collaborating directly, and worked on the “word/image novel” on and off for seven years before it was abandoned for lack of funding (in the 1970’s, “graphic novel” was a not a widely recognized term or a viable marketplace option).

Burroughs’ text was published by itself in a more conventional form as Ah Pook is Here.

A good deal of art was created for the book, however, and some of it is on display McNeill’s site and on a site devoted specifically to the Ah Pook is Here project.

There is an interview with McNeill online, conducted by Larry Sawyer, that includes larger versions of some of the images from the project, as well as some other examples of McNeill’s art.

McNeill has written an account, not yet published, of his collaboration with Burroughs titled Observed While Falling.

McNeill did a year and a half of research for the Ah Pook is Here project, combing through the Mexican Cultural Library in London and researching the artwork of Frederick Catherwood, a real-life Indiana Jones with a paint box (see my post on Frederick Catherwood).

Other artistic influences seemed to be less from mainstream or European comics and more from art history, in particular the horrific visions of Hieronymus Bosch, shadowy gothic art, mid-20th Century book illustration and the deep chiaroscuro of the Baroque, lending the panels a unique visual tone.

There will be a show of artwork from the project, The Lost Art of Ah Pook is Here, at Salomon Arts gallery in New York (Tribeca) from November 14 to December 14, 2008.