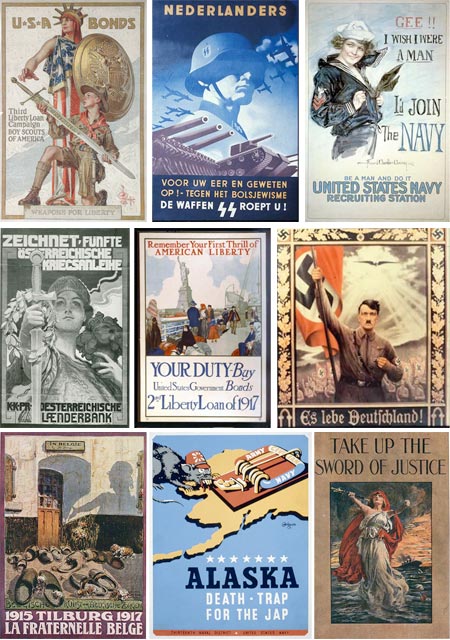 It’s commonly thought that “propaganda”, as a technique of spreading misinformation, or slanted opinions, for the purpose of manipulating opinions, has been utilized primarily by oppressive regimes like Imperial and Nazi Germany in the early part of the 20th Century or the Soviet Union or Communist China in the latter part.

That in itself is a form of propaganda, which can be, and often is, utilized by Western democracies. Propaganda is simply a technique, not a set of values. It can just as easily be employed in a “good” cause as an “evil” one.

What distinguishes propaganda from information, aside from the fact that it is often disinformation, is that it is calculated to appeal to the emotions and circumvent rational judgement. One of the key features of propaganda is that it most often (almost always, in fact) taps into the power that images have to reach us on an unconscious level.

You may be familiar with propaganda’s rich cousin, advertising.

The two join forces in times of political change, i.e. elections, in the form of campaign ads. Case in point: turn the sound off on political ads and look at the images employed, the use of unflattering or even scary pictures of the untrustworthy opponent, coupled with images of suggestive associations, often designed to provoke fear or uncertainty, and the noble, shining face of the candidate being promoted (often shown in a thoughtful or heroic upshot).

The use of propaganda in times of war, both hot and cold, has long included the art of propaganda posters, used to elicit feelings of nationalism, encourage enlistment and contributions to bond and materials drives, and frequently to characterize the enemy as subhuman, often with the use of racial stereotypes.

Some of these posters, particularly in the periods around the first and second World Wars, utilized the talents of top illustrators, as exemplified by the posters in the top row above for WWI U.S. War Bonds by J.C. Leyendecker and Navy Recruitment by Howard Chandler Christy (and of course the iconic “I want you” Uncle Sam poster by James Montgomery Flagg).

The ASIFA Animation Archive has two fascinating articles based on a collection of propaganda poster images collected by Louis Van Den Ecker, a technical advisor for early 20th Century films like Beau Geste, Adventures of Robin Hood and The Three Musketeers, who was hired by the studios to ensure period accuracy. They were found in a junk shop by ASIFA director Stephen Worth and are presented in separate articles on WWI and WWII.

Wikipedia has a collection in association with their article on propaganda, and there is a collection of re-purposed propaganda posters, reworked to serve as commentary (and propaganda) on current social and political issues on AntiWarPosters.com. I’ve listed more resources below.

Some of them may seem quaint and out of touch with modern sensibilities, but others still carry an impact. As you look through them, see if you can be mindful of your emotional response, either for or against the intentions of the posters’ creators (outrage and indignation are emotions, too).

The range and visceral impact of these images point out the striking power artists have to affect emotions and elicit an unconscious response. Even those of us who consider ourselves intellectually removed and visually sophisticated are not immune to the effects of manipulative images.

Think about that as you watch ads, political or commercial, on television. How often are our impressions and opinions being shaped by images?