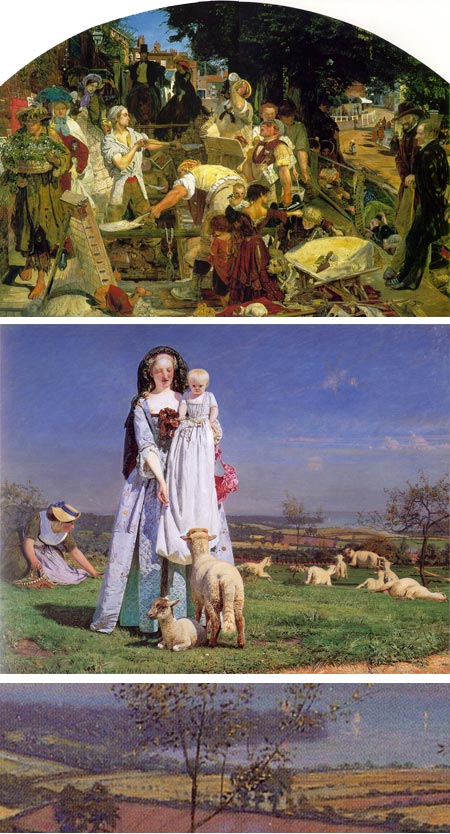 Ford Madox Brown was a Victorian painter who is often mentioned or included in books and articles on the Pre-Raphaelites.

Though he was lifelong friends with Dante Gabriel Rossetti, the leader of the Pre-aphaelite Brotherhood, and was philosophically in keeping with many of their ideals and artistic aims, he was never actually a member of the Brotherhood. He got on less well, evidently, with other members William Holman Hunt and John Everett Millais.

Brown’s artistic predilections came largely from the influence of the Nazarenes, a group of German painters, including Johann Overbeck and Peter von Cornelius, who were established prior to the Pre-Raphaelites and who shared many characteristics with them in style and artistic philosophy.

Brown was in opposition to the Royal Academy, which dictated artistic acceptance in England at the time, and was one of the first painters to mount one-man exhibitions. Rossetti was actually a student of Brown’s for a short time, but quickly changed to study under William Holman Hunt. It seemed to have little effect on their friendship.

Brown’s most renowned painting, Work (image above, top, larger version here, detail here), is notable for it’s detail and technique, but to my mind is weighted down with its ambitious attempt to essentially represent all aspects of life in Victorian England. The subjects within the painting and its historical context are fascinating, though. The city of Manchester Art Gallery has an interesting interactive, aimed at grade schoolers, that examines some of the social aspects the painting.

One of the notable characteristics of Work is that it was painted in part on location, an unusual practice particularly for work of this kind. The painting took thirteen years to finish.

It was also in Manchester that Brown completed the series of murals that would be the major achievement of his later career (many are viewable on Wikimedia Commons).

Another notable painting of Brown’s was The Last of England, showing a family forced to leave the difficult conditions in England in search of a life elsewhere, a situation facing Brown himself until sale of the painting kept him afloat.

A notable earlier work is The Pretty Baa-Lambs (image above, middle with detail, bottom, large version here), which is mentioned as a pre-Pre-Raphaelaite work (if you’ll excuse the expression), debuting in 1852 and painted on a white ground, instead of the customary browns, for unusual vibrancy of color. The same painting is sometimes mentioned as a precursor to Impressionism as well, in that it was painted largely on location and with an uncanny fidelity to the look of natural daylight.

One Reply to “Ford Madox Brown”