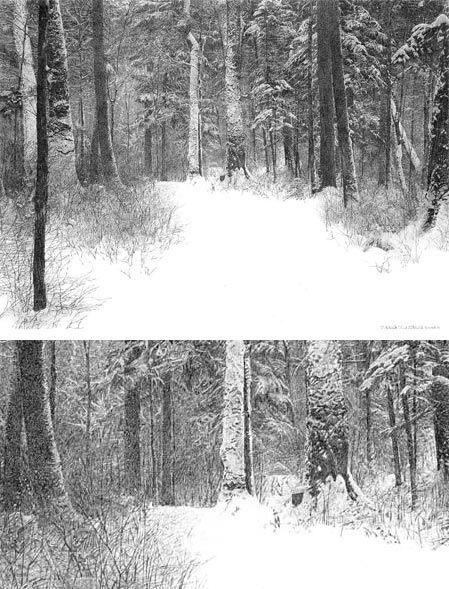 Chinese artist Yutang Yang draws intensely intricate pen and ink drawings of landscapes, in which his detailed approach creates evocative representations of the visual textures of trees, bark and grasses.

This approach is particularly effective in his depictions of winter forest snow scenes, like Bewildering (image above, with detail, larger image here), in which the white of the paper becomes the smooth surface of snow covered ground.

I’m not certain I have a correct grasp of his artist’s statement about Realistic Penart, but I come away with the impression that he feels his approach has as much in common with the way paintings are composed as they do with traditional pen and ink (bringing to mind Franklin Booth’s reputation for “painting with a pen”), and holds the practice as worthy of comparison to painting.

Yutang was born in Chung-chuen in northeastern China, and though showing artistic ability at an early age, he failed the entrance exams to art college twice. He worked for a time on a farm camp during the Cultural Revolution, later went to work for a design firm; and eventually set out on his own as a freelance artist.

He went to Japan to study, was deeply impressed with the training, and delved into his intensive research in to pen art. He returned to China and began his series of drawings of the Chinese landscape. He published two books on the subject, Detailed Analysis of Penart Technique and Collection of Penart.

There is a gallery on the artist’s site, with works arranged by year. (The images are slightly marred by watermarking, but it’s not too intrusive.) There is a high resolution image on the Art Renewal Center (scroll down).