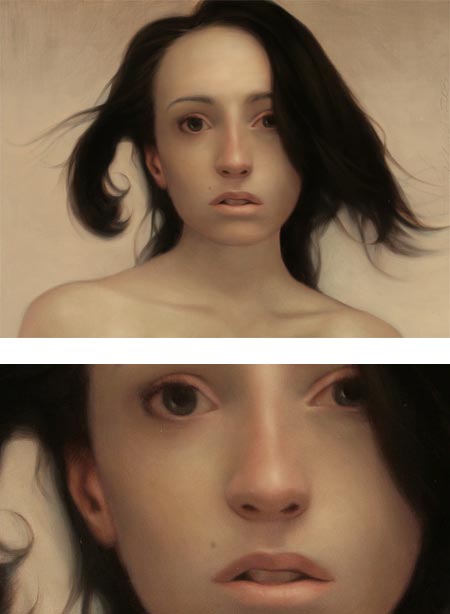 He was always interested in drawing and art, but in following the expectation that he would go into the sciences, his BA in art was earned at the University of Iowa while simultaneously pursuing a degree in Biology.

Lucong followed his desire to be an artist first on leaving school, moving to Denver and teaching himself to paint in oil, and achieving recognition relatively quickly.

His oil portraits have a fascinating feeling of delicacy in their Ingres-like attention to line, and the use of muted value and hue relationships within the faces. His faces are often set against a subdued background in similar tones, leaving the subjects’ hair in striking, almost graphic, contrast.

At other times, he uses more dramatic value contrasts between the face and background, but still keeps the color carefully restrained. He sometimes poses his subjects in front of other works of art.

I noticed an almost Gothic simplification of the shapes of eyes; which, along with the sometimes formal poses, gives the portraits some of the penetrating stillness found in pre-Renaissance art.

The portfolio of works on the site is divided into painting and drawings. The drawings, though apparently drawn from life, are more interpretive, almost caricatures, with heads large in proportion to bodies and a pleasantly cartoon-like handling of line.

On Lucong’s blog, you will find the works described in more detail, with dates and sizes. Clicking on the blog images reveals larger versions of the images (lacking in the regular portfolio) that let you appreciate the handling of the surface and marvelous details of the work. There are also pieces there that are not in the portfolio section.

There is a wistfulness to the expressions of his sitters, perhaps exemplifying what he describes in his statement as a longing for something undefined that can never be fully obtained.

[Contains some images that could be considered NSFW]

[Update 2014: Lucong seems to have discontinued his website and blog, and is using a new Tumblr blog: http://lucong.tumblr.com/]