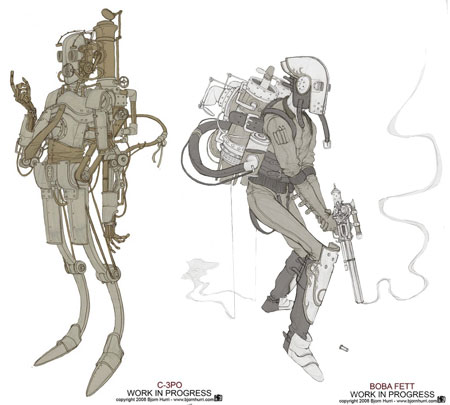 Björn Hurri is an artist who, according to the sparse biographical information on his web site, will “soon live in the UK” and work for the gaming company Creative Assembly.

Hurri also does freelance illustration, and indulges in imaginative exercises for his own amusement; one of which is his series of steampunk versions of Star Wars characters, which he has been recently posting on his space on Gorilla Artfare (see my previous post on Gorilla Artfare).

“Steampunk”, for those unfamiliar with the term, is the fictional concept of a world in which Victorian technology is projected against modern concepts, e.g. mechanical analog computers instead of digital electronic ones, airships instead of jets, and, of course, steam power in place of internal combustion engines and electricity. (Steampunk is a literary sub-genre, in some ways related to “cyberpunk”.)

Steampunk offers a rich vein for graphic playfulness, and Hurri has obviously had fun with the mechanical apparatus, belts, hoses, valves and gears in his fanciful interpretations of Star Wars characters like C-3PO and Boba Fett (above).

If you go further into his pages on Gorilla Artfare (via the numbered navigation at the bottom of the page), you’ll find a variety of sketches, drawings and more finished works, often of imaginative designs for monsters, creatures and alien figures.

You’ll also find similar subjects in the Illustrations section of his web site. There is also a Sketchbook section, arranged by year.