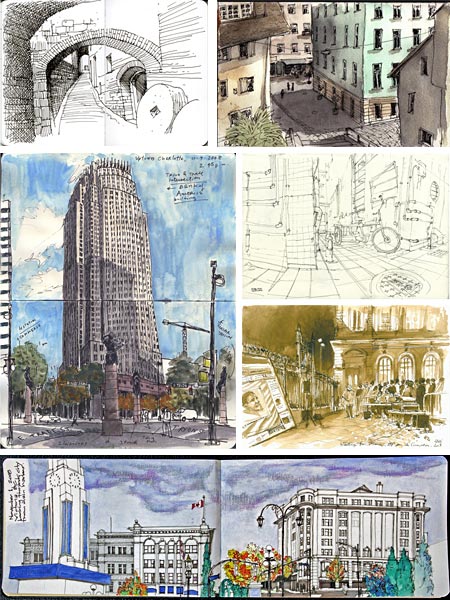 I just discovered the Urban Sketchers blog a couple of weeks ago, and it immediately became one of my favorites.

I enjoy location sketches done in an urban environment, particularly travel sketches, and the blog has much of that feeling, even though the contributors are often sketching in their home city.

In addition to Tyrell, contributing artists that I have featured previously on Lines and Colors include Lok Jansen and Laura Frankstone.

Other contributors are from various cities in France, Spain, Italy, Denmark, Norway, Germany, Russia and other locations in Europe; a number of cities in the US, including New York, San Francisco, and Seattle, as well as cities in Canada and other parts of the globe, like Tokyo, Bangkok, Tal-Aviv and Sao Paulo. You can see the contributors listed by location in the side bar.

There is also a Meet the Correspondents page, on which some of the contributors give short profiles of themselves, their subject cities and their sketching practices.

There is a variety of approaches in medium, drawing style and subject matter, though some common themes, like the frequent use of the ubiquitous and oh-so-convenient Moleskine sketchbooks, and a consistently high level of quality.

The blog is an extension of the Urban Sketchers Flickr group started in 2007 by Seattle illustrator/journalist Gabi Campanario.

The subtitle of the blog is “See the world one drawing at a time”, and though the blog has only been up since October, with an “official” launch on November 1st, there is already a world of images posted from the multiple contributors.

Next to traveling and sketching yourself, what better way to see the world than through the eyes and pens of artists?