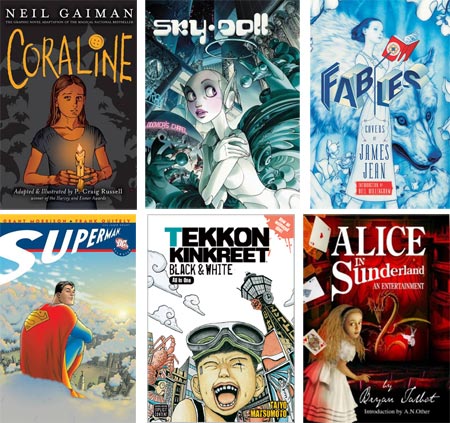 Ahhh…, it’s that time of year, the scramble through the barrage of “Buy this!” “Buy that!”, mall stuffing, parking lot screaming, credit card swinging, Scotch tape sticking, present buying madness; however tempered it may be this year by the ongoing Collapse of Western Civilization.

So, just as sure as the days shorten, lists appear, guiding us through the maze of what to buy and what was good this year.

In lieu of attempting a list myself, given the sorry state of my “yet to be read” book and comics stack, I give you a short list of lists; in this case lists of the year’s best graphic novels and comics related books as suggested by various sources.

ALA: 2008 Great Graphic Novels for Teens

Publisher’s Weekly: Best Books of the Year (scroll down for Comics)