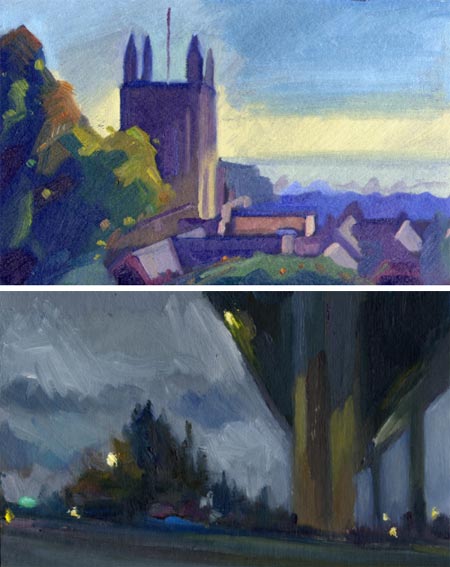 I first came across Antony Bridge in the form of his time-lapse YouTube videos about pochade painting, when I was doing research on pochade boxes.

In them you can see Antony painting at various locations in the English countryside and towns, using his small hand-held pochade box, as well as painting small self portraits.

I followed links to the site at pochade.co.uk where he displays and sells his paintings with other pochade artists like Carl Melegari and Ben Spurling, interviews artists who do pochade painting, (including Carol Marine, who I wrote about here), shares a blog with other painters on the site, and also sells the small hand-held pochade boxes he uses. These are made on a small scale basis by a UK carpenter and designer who works under the name of Red Top designs.

More recently, Bridge and Carl Melegari have chosen to display and sell their work on a joint site called The Pochade Gallery, with a current painting by each artist on the home page and an archive of both artist’s work. (The arrangement of the archive is a little confusing at first glance, take note of the artist signatures above the left and right sets of three columns.)

Antony Bridge (image above, top) studied illustration and, when not pochade painting, works as a freelance designer creating title sequences for TV productions as well as doing event branding. His pochade paintings range from hillsides and town scenes to still life and interiors. He also has a series of self portrait studies.

Ben Spurling (image above, bottom) was also trained in illustration. His painting subjects lean toward coastlines, mountains and dramatic skies, in addition to smaller scale subjects and still life.

They both have a passion for traveling the countryside, pochade box at the ready to capture a fleeting scene. As the description of pochade painting on the pochade.co.uk site declares: “Who needs a camera?”