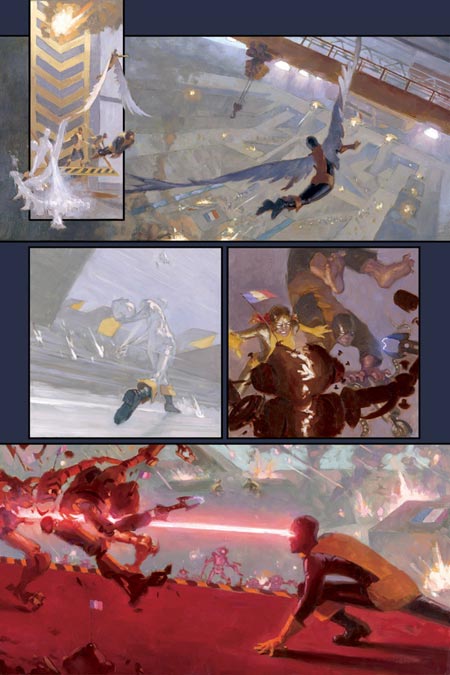 At one time the brief description line at the top of Paolo Rivera’s blog read: “I am a painter for Marvel Comics. Really, I am.”

If that seems odd, you may not be aware that many comic book overs are painted (a practice that has a fairly long history) and, in recent years, an increasing number of comics stories themselves are being told in fully rendered painted panels.

I trace fully painted comic stories back to the pioneering work of Will Elder on Little Annie Fanny in the 1960’s, though perhaps there were antecedents in European comics I’m not aware of. The limiting factor in mainstream American comic books was printing technology. For a long time comics were printed by letterpress (like newspapers), and color was applied by hand-cutting stencils.

That has changed dramatically, of course, and in modern comic book printing almost anything is possible; and the main limitation on painted comic book stories is that the process can be even more work and time intensive than traditional ink outline with filled colors.

Some purists don’t like the painted approach, feeling that it’s not “comics” unless it’s black line art with color fills, but I think it works fine as long as the artist has good visual storytelling skills.

Though within the practice of painted comics stories artists can take a variety of approaches, and in the hands of some artists it can feel forced and stiff, with the visual weight of the fully painted images slowing down the pace of the story.

Rivera, I think, is an artist who has a light and varied touch to his painted interior panels, and a natural feel for this variation on the comics medium. He has an approach that flows with the story, propelling it rather than slowing it down, and providing a wonderful textural quality to the images that only painted panels can provide.

Rivera grew up around art, his parents owned an art supply store, and he started working for Marvel comics while still a junior at the Rhode Island School of Design. He found his calling in comics, particularly painted comics, when he was struck by the painted comics work of Alex Ross on Marvels.

Rivera has become well known as a painted cover artist and for his painted storytelling work on a series called Mythos as well as titles like Spectacular Spider-Man.

Lately he has been showing himself to be adept at the traditional line art style of comic storytelling, tough I hope it doesn’t mean we’ll see a lot less of his painted work.

As part of the lead-up to the New York Comic Con, coming up February 6th – 8th, where Rivera will be among the guest artists, he is giving a lecture on Comics, Color and Composition at the Brooklyn Public Library on Wednesday, February 4th, 2009.

The lecture will be at 7pm in the Dweck Center of the Central Library on Grand Army Plaza. It’s free and open to the public and will be followed by a question and answer session, so comic-artists-to-be can grill him on his drawing and painting techniques.