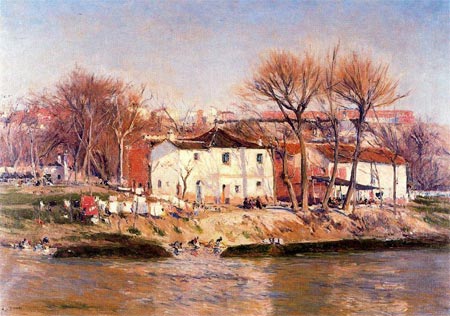 Aureliano de Beruete y Moret was a Spanish painter active in the late 19th and early 20th centuries. He was born in Madrid and spent most of his life there, though he traveled widely.

Beruete started out to be a lawyer, earned his doctorate, but at the same time studied painting with Carlos Múgica. He initially embarked on a career as a politician and became a member of of Parliment, not a career normally thought of as a cross over with painting (Winston Churchill notwithstanding), but eventually choose the artistic path and studied with Martin Rico and Carlos de Haes at Academia de Bellas Artes de San Fernando in Madrid.

Martin Rico was one of the Spanish precursors of Impressionism, and picked up some of the same influences as the French Impressionists through time spent with the Barbizon painters; and Carlos de Haes played a major role in bringing the Impressionist passion for plein air painting to Spain

They both undoubtedly had an impact on their student Beruete, who became one of the most significant Spanish exponents of the Impressionist characteristics of open brushwork and location landscape painting. His palette was a bit darker, however, and he always showed the influence of great Spanish masters of the past, including Diego Velázquez, about whom he assembled the first catalogue raisonné.

Beruete was friends with the amazing painter Joaquín Sorolla y Bastida (who painted a portrait of Beruet), though he never fully adopted his friend’s brighter palette. Both get labeled as “Spanish Impressionists”, but neither were adherents of the French painters’ theories, nor did they feel compelled to abandon academic traditions as did their French counterparts.

I associate them more with the painters who get labeled “American Impressionists”, who also adopted elements of the Impressionist style, but maintained their own independent vision and the solid underpinnings of academic realism.

Beruete is not well known to Americans (I just discovered his work recently), and it’s a real treat when you first discover his beautifully loose, confident brushwork, rich textures and sweeping compositions.