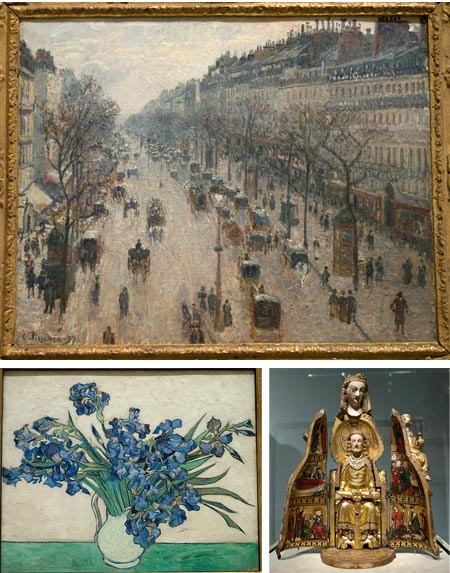 Wikipedia Loves Art is a combination photography contest and scavenger hunt with the intention of illustrating articles on the free encyclopedia with photographs of specific art objects from participating museums, taken by the contestants and released under a Creative Commons License.

There are participating museums in 5 states in the Northeastern US, as well as in Tennessee, Texas, Hawaii and California, and in the UK at London’s Victoria and Albert Museum.

Individuals or teams (up to ten people) register for participation at various museums and then shoot photographs (according to the rules of each individual museum, usually no flash, no tripods, and only from the permanent collection) of items that fit themes on a “Goal List”. These include themes suited to various galleries of the museum’s collections and a general topic of Valentine’s, the overall theme of the event.

Usually the photographer takes at least two photographs of an object, one to tag it with a note held up next to the object with the Goal List tag and object information, and another high quality image (or several) for potential use in the Wikipedia articles.

The contest takes place during the entire month of February, 2009 (hence the Valentine’s theme), and although the prizes are modest, such as tours of particular collections given by their curators, the contest sounds like a lot of fun for art lovers and photographers. You can go on your own or participate in a planned event with other photographers or groups.

The photographs get uploaded to the Wikipedia Loves Art Flickr Group, which also has notices of particular meet-ups (Brooklyn Museum today) and links to Goal Lists and registration.

The page also contains the shooting guidelines for each museum, the overall qualifications and the notice that eligible photographs must be released under the correct Creative Commons License. These guidelines are also on the main Wikipedia article along with links to individual Wikipedia pages about the participating institutions, which also often have their own pages devoted to the event.

Photographs will be selected from the entries and appropriate choices, judged for quality and appropriateness, will be used to illustrate Wikipedia articles, with credit to the photographer.

Even for those of us not participating, it should be interesting to watch the results at they are posted in the Flicker Group. Those currently posted are mostly from the Metropolitan Museum of Art, and seem to be largely of sculpture and historic artifacts, but the event has just started.

They are also of mixed quality, some people are better photographers than others, and low light photography with a hand held camera is not that easy (having a camera with “Image Stabilzation” is helpful). The Smithsonian is probably the only museum that allows flash photographs of two dimensional artwork (though they really shouldn’t).

The event should yield some interesting results. I’m particularly looking forward to the posting of at least a few high-resolution photographs of paintings, like the Pissarro in the image above, top (larger version here, click “Original” at top for high-resolution version). I just can’t get enough of those.

The Wikipedia Loves Art combination photography contest and scavenger hunt runs through the end of February, 2009.

Even after that it should be worthwhile looking through the Wikipedia Loves Art Flickr Group.

One Reply to “Wikipedia Loves Art”