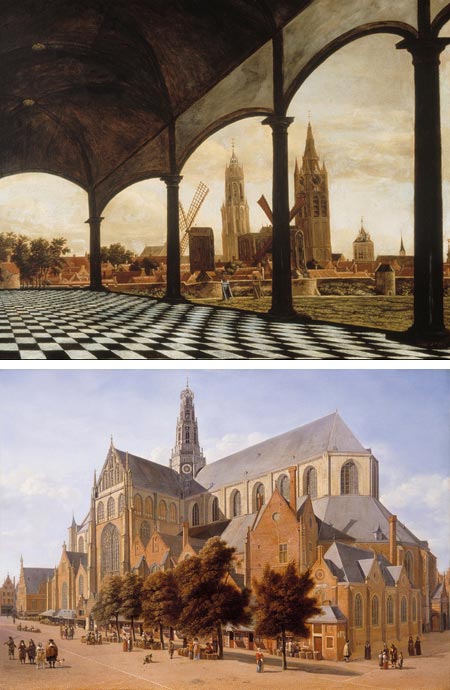 In reviewing the exhibition currently at the National Gallery in Washington, D.C., Pride of Place: Dutch Cityscapes of the Golden Age, Blacke Gopnik writes in his Washington Post article The ‘Golden’ Compass that contemporary viewers may not know how to correctly look at classic Dutch landscapes and cityscapes.

He suggests that this is more than having a background knowledge of the artists or particular paintings, and in fact has to do with physical proximity to the painting, a reference to a kind of “sweet spot” from which the painting was intended to be seen, particularly in terms of being close enough to the image for it to fill a significant part of your visual field; but also, in some cases, requiring a vantage point from one side or the other.

A case in point is Daniel Vosmaer’s Delft from an Imaginary Loggia (image above, top), which looks “off” at first, but apparently resolves into a strikingly naturalistic scene when viewed from a position close to the bottom left of the painting. Some are more natural seeming in appearance when seen from a distance or in reproduction, like Adriaensz Berckheyde’s The Grote or St. Bavokerk in Haarlem (image above, bottom), but still evidently reveal their full force only when seen up close.

Gopnik goes on to suggest that over half the paintings in the show, and many other Dutch cityscapes, interiors and even still lifes, are meant to respond to an off-center point of view.

It’s a fascinating idea, and one I hope to put to the test by traveling to see the show.

When I first looked at the slide show in the Post of images from the exhibition, I was ready to jump in the car and drive down, because it looked as if Vermeer’s beautiful View of Delft (larger image here) was among the paintings on exhibit. I saw this amazing work when it was at the wonderfully extensive Johannes Vermeer exhibition at the National Gallery back in 1995, and I have been dying to see it again since. Unfortunately, that work was only part of the current exhibition in its other venue, the Royal Picture Gallery Mauritshuis, which is home to the painting. Apparently the curators at the Maruitshuis felt it was too dangerous to allow the large painting to make the trans-Atlantic voyage again, as explained here.

Still, the current exhibit of Dutch cityscapes, from the height of their glory, should be something to see indeed. The exhibition contains 48 paintings by over 40 Dutch masters, including Gerrit Berckheyde, Aelbert Cuyp, Jan van Goyen, Jan van der Heyden, Pieter de Hooch, Hendrick Vroom, Pieter Saenredam, and Jan Steen; and is supplemented with maps, atlases, illustrated books and prints.

Pride of Place: Dutch Cityscapes of the Golden Age is on display at the National Gallery in Washington until May 3, 2009.

2 Replies to “Pride of Place: Dutch Cityscapes of the Golden Age”