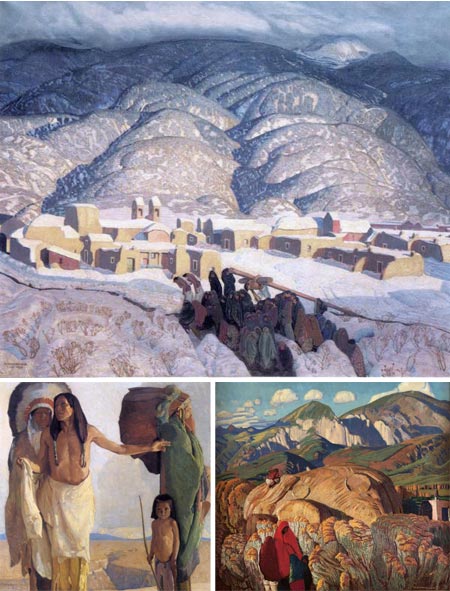 Ernest L. Blumenschein, an artist who was integral to the Taos Art Colony that flourished in New Mexico around the turn of the 20th century and instrumental in forming the style we now associate with Southwestern American art, was originally trained as a violinist at the Cincinnati College of Music.

After taking an illustration class at the Cincinnati Art Academy, Blumenschein decided on a career as an illustrator in lieu of pursuing music, and moved to New York to study at the Art Students League.

Convinced that he needed European training to excel as an artist, Blumenschein went on to study at the AdadÃ©mie Juilan in Paris. Word is that he played violin to put himself through art school, though I don’t know if that refers to New York or Paris.

Though he enjoyed success an illustrator for popular magazines on his return, it was on trips to the American Southwest, one of which ended in Taos, New Mexico as the result of a broken wagon wheel, that he found his great inspiration as a painter; and he eventually returned to settle there, where he co-founded the Taos Society of Artists.

He developed a style of landscape painting devoted to the characteristic land forms of the American Southwest, as well as finding subjects and inspiration in the Native American and Spanish American cultures that flourished in the area.

Blumenschein’s paintings are founded in his training in classical realism, but carry the bright colors and fresh brush handling of Post-Impressionism, hints of Modernist geometry and some of the muscular feel of Thomas Hart Benton’s undulating Midwestern landscapes.

The Phoenix Art Museum will host a major exhibition of Blumenschein’s work, In Contemporary Rhythm: The Art of Ernest L. Blumenschein, from March 15 to June 14, 2009.

There is a new book accompanying the exhibit: In Contemporary Rhythm: The Art of Ernest L. Blumenschein.