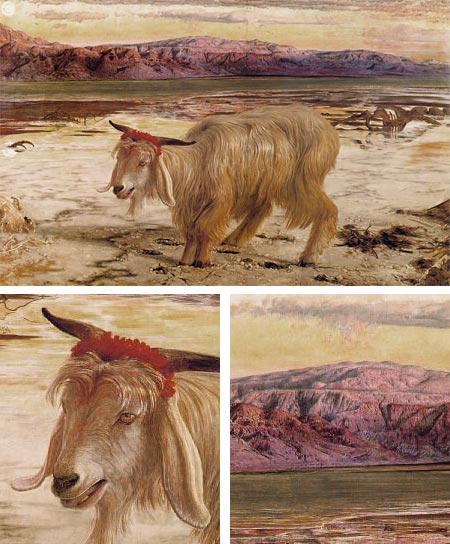 Sin and Salvation: William Holman Hunt and the Pre-Raphaelite Vision is the title of a show of the artist’s paintings, drawings, engravings, photographs and other items (64 objects) opening on June 14 at the Minneapolis Institute of the Arts.

Hunt and Millais imbued their canvasses with brilliant color of almost impressionistic intensity, but restrained within a precise realism that strove to be faithful to nature. Their art was meant to be closer in spirit to medieval art than to the classical compositions and formal poses of the Renaissance, which they saw as exemplified by Raphael, in which nature was sublimated to formal aesthetics; hence the characterization of themselves as “Pre-Raphaelites”.

I wrote an article about William Holman Hunt previously, in which I talked about my admiration for the brilliant, jewel-like quality of his paintings, as in the small but intensely beautiful painting of Isabella and the Pot of Basil that is in the Delaware Art Museum.

The show at the MIA was organized by the Art Gallery of Toronto ad the Manchester Art Gallery in the UK, and borrows heavily from the latter museum’s excellent collection.

The painting shown above, The Scapegoat (large version here) is not in the show, though an alternate version of the same subject, is which the composition features a rather striking rainbow, will be on display.

Sin and Salvation: William Holman Hunt and the Pre-Raphaelite Vision at the Minneapolis Institute of the Arts June 14 to September 6, 2009.

5 Replies to “William Holman Hunt and the Pre-Raphaelite Vision”