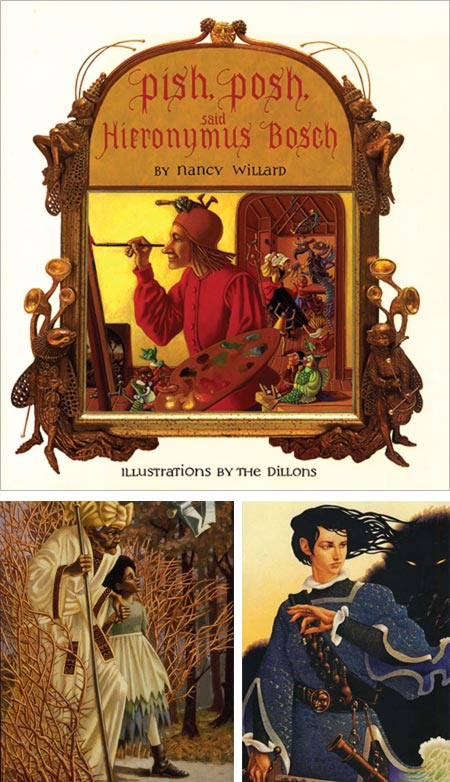 Lionel Dillon and Diane Sorber met while attending Parsons School of Design in New York in 1954. Their initial rivalry evolved into competitive friendship, a romantic relationship and eventually what has become a lasting marriage and artistic partnership.

They call their collaborative artistic approach the “third artist”, viewing themselves as a single artist composed of the greatest strengths of the two individuals, and more capable together than either could be individually. Though not unique, this kind of artistic cooperation is rare and difficult to manage, usually because of the issues artists have with clashes of ego.

The Dillons seem to have found key to working through these issues and have managed a very successful creative relationship. Usually credited as “Leo and Diane Dillon” or “The Dillons”, they are now widely recognized in American illustration and have garnered numerous awards for their illustrations for children’s books, science fiction and fantasy novels and mainstream works; including two Caldecott Medals, several New York Times Best Illustrated Awards, Boston Gobe/Horn Book Awards, Coretta Scott King Awards and the Society of Illustrators Gold Medal.

There is an interview with the Dillons on Locus in which they discuss the evolution and methods of their collaborative process.

Their work delves into a broad swath of cultural influences, and utilizes an equally wide array of media, techniques and stylistic direction, always in an effort to bring relevance to the nature of the work that the illustration is meant to accompany.

Looking over illustrations from the course of their career you will find work that is highly stylized and very graphic, work that is rendered in naturalistic detail and work that combines varying degrees of stylized design and realism.

Their illustrations can be wonderfully specific to the topic of the work, as in their fancifully appropriate illustrations for Nancy Willard’s Pish, Posh, Said Hieronymus Bosch (image above, top).

The Akron Art Museum in Ohio is currently showing an exhibition called The Global Artistry of Leo and Diane Dillon that runs from now until June 21, 2009.

The Dillons don’t seem to have a dedicated web site, but I’ve assembled some resources below.

There was a book of their work published in 1981, The Art of Leo and Diane Dillon, but it’s out of print. It looks like Ken Steacy is publishing a new one.

Of course, you can also look for some of the many other books they’ve illustrated.

7 Replies to “Leo and Diane Dillon”