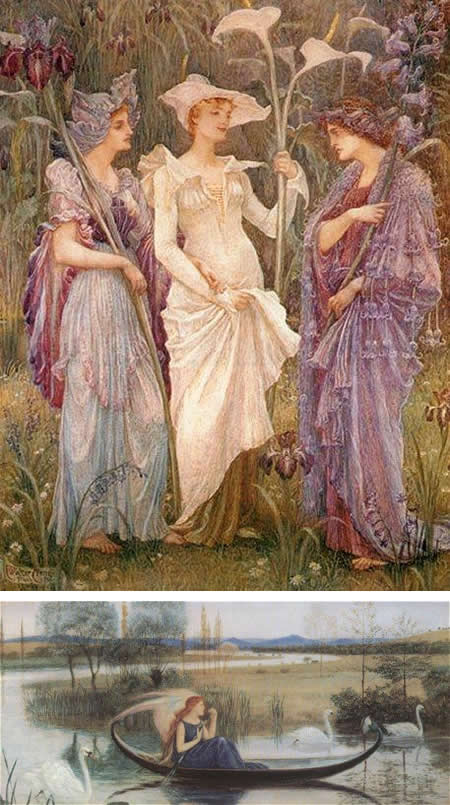 Walter Crane was one of the premiere English illustrators. He was active during the “Golden Age” of illustration, from the late 1800’s to the early 1900’s.

Crane’s elegantly designed, deliberately retro illustrations for children’s books were influenced by his admiration for the work of Edward Byrne-Jones, and undoubtedly by the other Pre-Raphaelite painters, as well as by the Japanese prints that were favored in English and European society at the time.

Crane in return was also influential, both on his fellow illustrators, and on the wider Arts & Crafts Movement, with which he was integrally involved, having founded the Arts & Crafts Exhibition Society in 1888.

Crane was also a designer for textiles and wallpapers, and created gallery art, much in watercolor, and was an associate in the Water Colour Society.

His book illustrations range from graphically designed book pages, somewhat in the vein of Howard Pyle’s self-authored tales, to a more fully rendered style akin to his compatriot Arthur Rackham; though the artist who most often springs to mind for me in comparison is Edmund Dulac.

One of the best resources for Crane is the ArtMagick site, which has a bio and several pages of images. Wikimedia has quite a few book pages. You can read his entire illustrated Baby’s Own Aesop on MythFoklore.net, and a much shorter Beauty and the Beast on Bedtime Stories. Fontcraft has a font called Walter Crane, developed from examples of his hand lettering.

There are a number of books available with his illustrations and ornamentation.

Link: ArtMagick (bio and 3 pages of images)
Wikimedia
Baby's Own Aesop on MythFoklore.net
Beauty and the Beastand bio on Bedtime Stories
Athenaeum
Bio and images on HuntFor.com
Mlaspina
Bio on Wikipedia
Bio in Pitt.edu
Bio on Spartacus Educational
Font called Walter Crane on Fontcraft
Artcyclopedia (museum links and other resources)