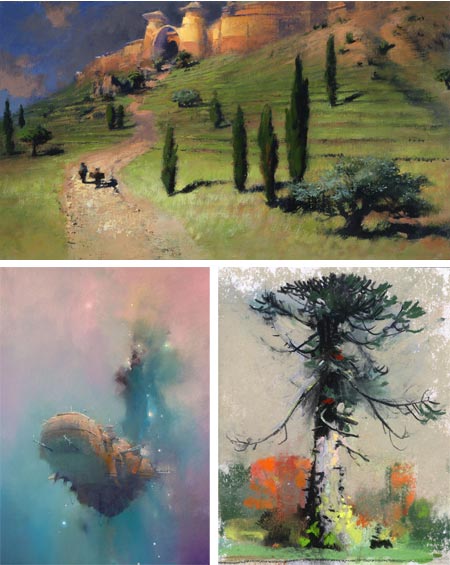 UK artist John Harris began painting at the age of 14 and entered Luton College of Art at 16. His interest in space, and the portrayal of the scale of large objects and distances, led him to illustration work in the science fiction and fantasy field.

He was influenced in his early paintings by the English Victorian painter John Martin, who painted large scale canvasses of large scale scenes, often dramatic depictions of Biblical disasters.

Over time, Harris moved away from the tightly painted Victorian style into the looser, more painterly and texture rich style he now employs.

He also moved away from his early experiments with techniques involving gouache and shellac inks, which, though they produced interesting effects, proved to be impermanent and fragile.

In addition to his work in publishing and advertising, his paintings are in the collections of NASA and the Smithsonian as well as numerous private collections.

Harris has a skill for using texture and color to suggest, where others might paint detail. His atmospheric otherworldly landscapes and space scenes are created from fields of multi colored and richly textured areas that in small sections might seem abstract in intent, but resolve in the eye into the feeling of more detail than is actually present (somewhat akin to the approach of John Berkey).

Harris revels in the feeling of monumental scale and often offsets his structures with suggestions of small figures.

Harris also paints traditional landscapes, though perhaps a bit non-traditional in that his personal vision often lends itself to slightly other-worldly choices of color and atmospherics.

There is a collection of his work titled Mass: The Art Of John Harris.

One Reply to “John Harris”