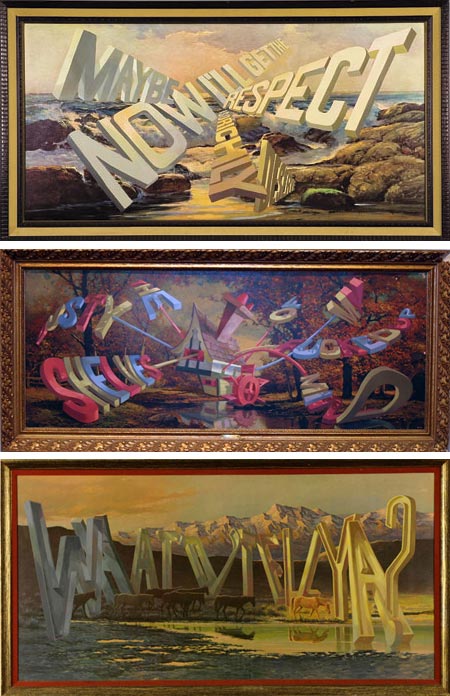 At one point Wayne White was a set designer for Pee-wee’s Playhouse, he also directed some stand-out music videos, most notably Peter Gabriel’s Big Time.

In a desire to do something “180 degrees different from Pee-wee”, White decided to take up painting, with the intention of doing landscape painting, and began to teach himself traditional oil painting techniques.

But White’s weird side kept intruding, with monsters and things creeping into the landscapes, until one occasion that changed his direction in an even odder way.

He had purchased a cheap mass-produced landscape reproduction with the intention of using the frame; and on a whim, took the otherwise to be discarded reproduction and painted a phrase on it in 3-D lettering, as if the letters were physical objects in the scene.

The response from his friends and associates was so dramatic that he continued a series of similar paintings of words painted on 1960’s and 1970’s reproductions of 19th Century romantic landscapes.

Since then has become much noticed, and has had seven solo shows, many at major galleries; the latest of which is at Mirelle Mosler Ltd in New York until July 25th, 2009.

The idea of painting words into pictures isn’t new, nor is the idea of one artist painting over reproductions of other artists’ work (Duchamp’s Mona Lisa mustache, L.H.O.O.Q., springs to mind); but White’s take on it, contrasting the deliberately picturesque landscapes with angry, snarky, sad and often vulgar phrases, seems to have hit a chord.

White is originally from Chattanooga, Tennessee and now lives in Los Angeles. A collection of his work, Wayne White: Maybe Now I’ll Get the Respect I So Richly Deserve, has just been published by Ammo Books.

(Note: images may be considered NSFW for language.)