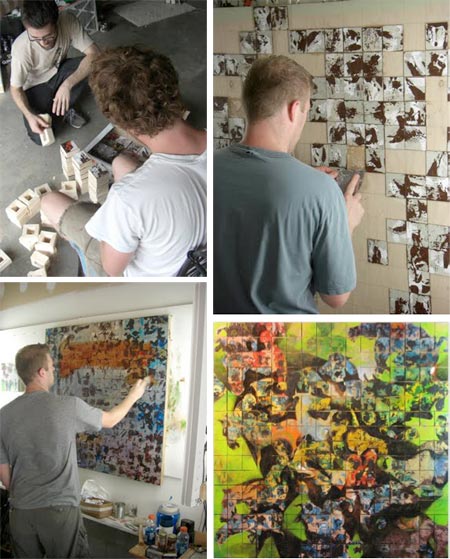 Sterling Hundley is a Virginia based painter and illustrator whose award winning illustrations were the subject of a previous Lines and Colors post in 2007.

Hundley has embarked on a new direction as a gallery artist, the initial debut of which will be a solo show at Ghostprint Gallery in Richmond from September 4th to 26th, 2009.

The title of the show, “emergent” is taken from the scientific principle of emergence, which describes that way complex systems emerge from a multitude of simpler interactions.

The reference is to Hundley’s process for these works, in which he begins with small (3×3″, 7.6×7.6cm) monotypes on mounted panels, which he assembles into larger arrangements, which are then assembled into yet larger arrangements, eventually arriving as a final composition in which Hundley says “I navigate the gauntlet of abstraction to arrive just this side of representational.”

Hundley’s illustration, though distinctly (and wonderfully) stylized, is representational in approach, and the new work is a distinct departure for him.

On his blog, Hundley has been chronicling not only the process of creating the works, from receiving shipments of the image blocks to the final assembly of the larger works, but also, as the date approaches, the process of preparing for the show.