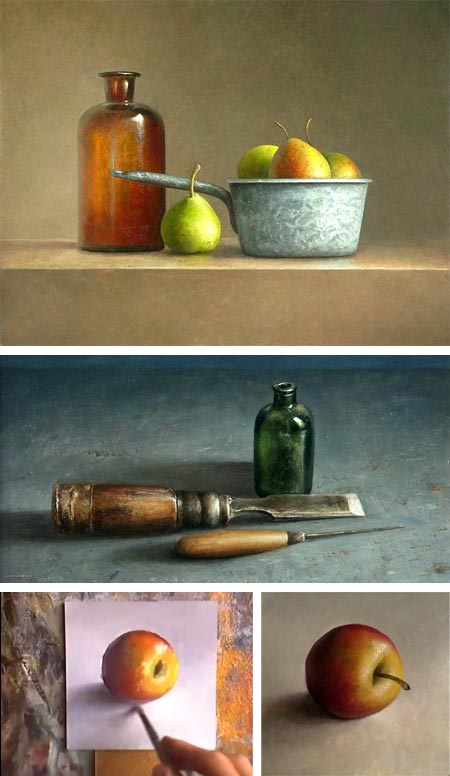 Van Riswick is a self-taught painter, originally having studied and then taught physics. He started painting in an Impressionist style; but then, after becoming familiar with some contemporary Dutch realists, started to reach back and study the masters, and moved to a more finished realist style.

His subjects are often fruit, vegetables, china and glassware; items that have been the staples of still life painting tradition, as well as tin boxes, tools, and other household items.

Van Riswick employs a controlled, subdued palette, with careful attention to lighting and shadow in his compositions. Though his handling is fairly finished, he leaves enough painterly surface to convey the appeal of visible, tactile paint. Texture is also an important element in his portrayal of physical objects; he captures the surfaces of wood, metal, glass and, of course, the various food items, with subtle visual clues and brief notation of variations in color and value.

His web site features his studio work. He also has a blog, Postcard from Holland, that features his more immediate small paintings, supplemented with a secondary web site that archives those smaller works.

There is an article on his site about technique, and he also posts videos to YouTube that are in instructional time-lapse records of the process of painting some of his small daily paintings (image above, bottom left, with finished piece, bottom right). These are very direct and simply done, and as such, are some of the more useful still life painting instruction videos on YouTube.