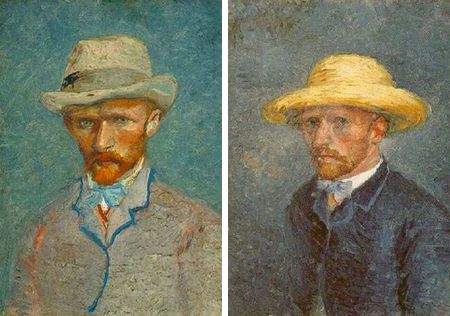 It has long been assumed that Vincent van Gogh never painted a portrait of his brother Theo, despite the number of self-portraits he completed during the two years he lived with Theo in Paris.

Now researchers at the Van Gogh Museum in Amsterdam, think they have determined that the presumed self-portrait at right, above, is in fact a portrait of Theo.

They are basing the assertion on an analysis of the facial features in the portrait, other Van Gogh self-portraits, particularly the one shown above, left, and photographs of Theo, who was in many ways similar in appearance to Vincent.

Both paintings, along with 91 others, are part of an extensive exhibition called Van Gogh in Antwerp and Paris: New Perspectives that runs to 18 September, 2011.

There is a feature on the museum’s site about the analysis, and a comparison of the above two portraits.